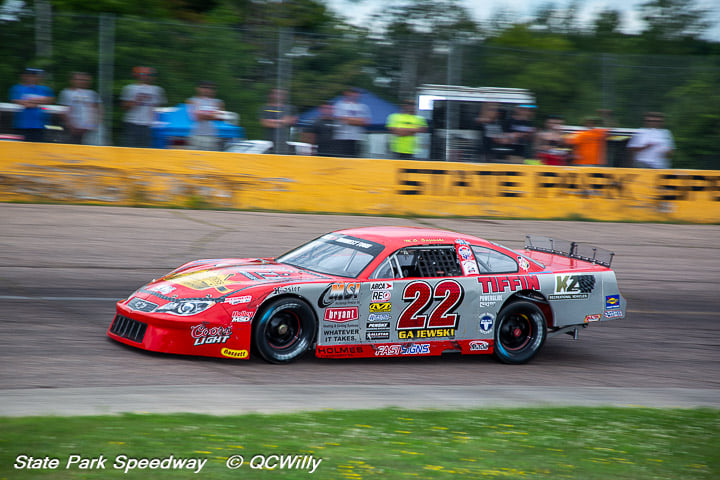 WAUSAU, Wis. (Aug. 27) – In a season otherwise dominated by one driver, 2020 was a year of remarkable parity in the super late model class at State Park Speedway, including in the season’s finale.

M.G. Gajewski won the final feature of the season in the Auto Select Super Late Models pres. by C-Tech, taking the main event on season championship night and becoming the seventh different feature winner in the class in nine points races this year. The veteran from Wausau reigned on a night when Gleason’s Justin Mondeik also wrapped up his first super late model championship at the speedway.

Gajewski led all 60 laps in the super late model finale at State Park, but it was anything but easy, especially for the final 20 laps. He fought off challenges from four different competitors, including Mondeik in the final laps, winning by two car lengths over Mondeik, who edged Wausau’s Brock Heinrich for second by inches.

“Yeah I’ll take it,” said Gajewski, who wasn’t even planning to race Thursday night until his son Matthew’s Midwest Truck Series race scheduled for Friday night at Madison International Speedway was cancelled due to expected thunderstorms. “We worked on it last week, we’ve been working on it this week…we’re getting there. I’m a happy man.”

Hot and muggy weather, closely matched cars and competitive streaks combined for a furious finish in the feature. Gajewski first had Travis Volm of Mosinee in his tracks for ten laps starting on lap 35, with Volm taking a look on the outside briefly on lap 41 and nearly getting a foothold off of turn two on several occasions as well.

Mondeik also was right behind Volm, and he made a run on the outside for second on lap 46. The two eventually got together on lap 49 with both washing up the track, allowing Heinrich to charge inside Volm into second.

Gajewski took advantage and sped off to an eight car length lead with just a handful of laps left, but that vanished when Mark Mackesy got into Volm, sending him spinning off turn two on lap 55. That set up a six-lap sprint to the finish with Gajewski and Heinrich on the front row but Mondeik, Volm and fifth-place running Dillon Mackesy all close behind.

Gajewski cleared Heinrich quickly, but Mondeik also worked past Heinrich for second on lap 56 and was on the leader’s doorstep. Gajewski was briefly slow coming off turn two on lap 57, causing Mondeik and others to check up, and Mondeik was taking a shot to the inside of the leader two laps later when Gajewski shut the door off of turn two. Mondeik tried on the outside one more time coming to the white flag, but Gajewski held off the challenge.

The race heated up after a competition caution after 30 laps. Mark Mackesy started outside Gajewski on the restart but, but Gajewski cleared him quickly with Volm moving into second. Mackesy would slip back to fourth with Mondeik also dropping back to fifth before working back to the front.

Mondeik clinched the points championship Thursday night just by qualifying, ending a three-year quest that included his missing championships in 2018 and 2019 by a combined ten points. He finished with a class-best three feature wins this season and won five super late model features at the track overall. No other driver won more than one feature in weekly racing, with Gajewski joining a list of winners that also included Heinrich, Luke Fenhaus, Jeremy Lepak, Dillon Mackesy and Mark Mackesy.

Heinrich finished second to Mondeik in the point standings. Dillon Mackesy finished fourth in the feature with Mark Mackesy fifth, and Dillon edged his uncle Mark for third in the final point standings, with Volm placing fifth in the season points.