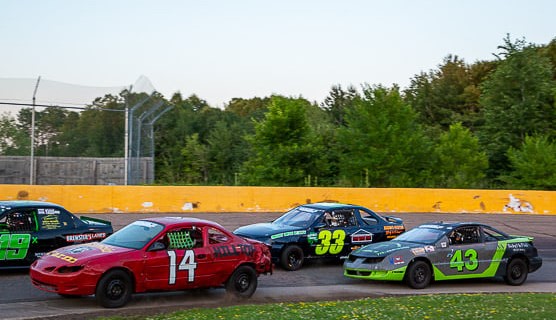 Championships are almost clinched in three of four divisions, but that is not the case in the mini stocks class, which is still heavily up for grabs. The top two in the standings are separated by just four points, and in all four drivers still have a shot at being champions.

Kyle Check of Shantytown with 712 points leads Wausau’s Garret Strachota by just two points in the mini stock standings heading into the final night. Tyler Custer of Stratford with 697 points is also just 15 points behind Check, and Eric Breitenfeldt of Wausau (681 points) also has made a late charge and is within distance if the top three slip up, 31 points behind Check after winning last week’s feature.

Check, Custer and Breitenfeldt all are searching for their first-ever championship in the class and at State Park Speedway. Strachota is aiming for his second mini stocks crown, having also won in 2017.

Check has one feature win but five top-three finishes, and he took the points lead for the first time this season after a second-place showing last week when a potentially bad points night turned brighter late in the feature. Check was blocked in traffic much of the race and running seventh until a late-race caution involving cars near the front. He also gained some spots by choosing the outside on the restart, and then got by Strachota for second late.

“It’s really exciting to have the chance to race for a championship going into the last race,” said Check. “It’s been a season full of ups and downs so a good finish Thursday would really be a great way to end the season. Regardless of where I finish in the points, it’s been great racing with Garret and Tyler and Eric this year and I’m sure the racing on Thursday won’t disappoint.”

Strachota could win a second championship in the class one year after he won three features and finished third in the points in the mini mods division. With the uncertainty of the COVID-19 pandemic, he didn’t even plan to race weekly this year at first but has been the most consistent finisher in the mini stocks with ten top-five finishes including two wins.

“At the beginning of the year when I decided to leave the mini mod at home with everything else going on in the world, I wasn’t really planning on doing a lot of weekly racing,” said Strachota. “It wasn’t until a week or two before the opener when I started hearing how big the mini stock class was going to be this year that I decided pull my enduro car out.

“I never imagined I would be in position to win the championship, and between that and having already won the mini stock championship in 2017 has really taken a lot of the pressure off. I’m excited for Thursday night to see who comes out on top.”

Custer is also not far behind the leaders with three feature wins and nine top-five finishes this year. Breitenfeldt has made up considerable ground on the top three in recent weeks with six consecutive top-three feature finishes, including two wins.

In State Park’s other three regular classes, drivers leading the standings all are in the same positions, essentially needing to just start the feature Thursday night to clinch titles.

Justin Mondeik of Gleason is in good shape to catch an elusive first super late model championship, after achingly close near-misses the previous two years. He finished four points behind Luke Fenhaus for the title in 2018 and was six points back of champion Jay Van Der Geest last year, but he enters Thursday with 565 points, putting him 71 points ahead of Brock Heinrich of Wausau.

Brian Schramm of Wausau and Greg Blount of Marathon also are both in line to win second straight championships in their respective classes with 60-point leads entering championship night. Schramm (730 points) leads Kolton Guralski of Wausau (670 points) in the pure stocks as he aims for his fourth SPS track championship overall. Blount (809 points) is well ahead of Wausau’s George Seliger (749 points) in the mini mods after winning his fifth feature of the season last week.