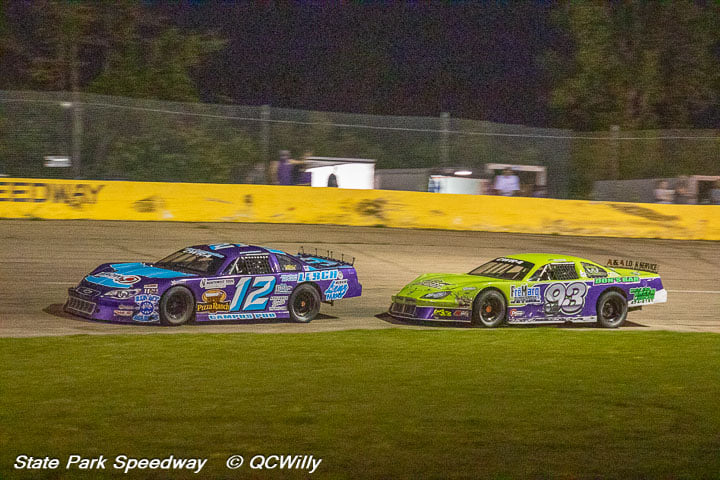 WAUSAU, Wis. (July 2) – Mark Mackesy won another super late model feature at State Park Speedway Thursday night, but not before facing a stiff challenge from someone he knows especially well.

Mackesy continued to add to his late model feature total at his home track Thursday night, winning his 58th career feature by claiming the 40-lap Auto Select Super Late Models presented by C-Tech. He did so by holding off his nephew Dillon Mackesy, denying Dillon his first-ever super late model feature win.

Mark Mackesy led all but one lap in the shortened feature, the length cut from an originally scheduled 60 laps after rain showers delayed racing for more than an hour midway through the program. The Wausau driver took the lead from Mosinee’s Travis Volm on the second lap and led the rest of the way to win his second straight feature going back to last Thursday, when he took the second Central Wisconsin Racing Association feature at SPS.

Dillon Mackesy ran behind uncle Mark for the final 36 laps, never more than a couple car lengths back. The son of former late model racer Wayne Mackesy got as close as Mark’s back bumper with 12 laps to go, then made a final run in the closing laps, taking a look on the outside but remaining behind and coming home as runner-up for the second time this season. He also bounced back after two rough weeks that included a blown engine two weeks earlier and an accident in his back-up car running with the CWRA late models last week.

Current points leader Justin Mondeik of Gleason finished third in the feature, with Brock Heinrich fourth and Luke Fenhaus fifth. Heinrich and Mondeik raced for third for 14 laps before Mondeik finally got inside Heinrich to move into the top three.