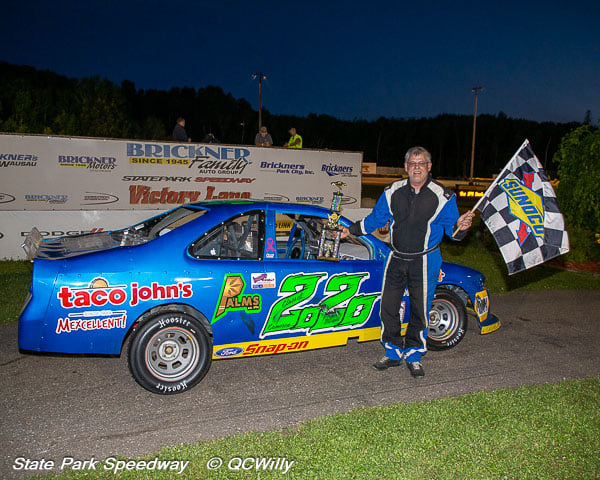 A shuffle at the front gave Blount the opening he needed and he pounced on it, going from fifth to first in two laps on his way to winning the 20-lap feature. The Marathon driver passed John Lietz for the lead on lap 11 and went on to win his first feature of the season.

Fast qualifier all seven nights so far this year and a top-three feature finisher each of the first six weeks, Blount had repeatedly come up just short in features, frequently getting caught in traffic. He was caught up again early on as Lietz, Noah Gajewski and Kevin Tessmer all swapped the lead in the first seven laps, but Gajewski fell off the pace between turns 1 and 2 on lap 9.

Blount took advantage of cars up front checking up, moving from fifth to third. He then took to the outside, passing Tessmer for second on lap 10 and Lietz for the lead one lap later. Blount cruised the rest of the way to win, but not before a nervous moment on lap 12 when he got sideways, one of a number of cars to slip in some fluid that brought out a caution. George Seliger finished second with Tessmer third.

“You know what, it’s well overdue and gosh darn it, does it feel good,” said the personable Blount in a post-race interview in Brickner Family Auto Group Victory Lane. “I thought I was going into the fence after that pass for the lead, I knew no one was close to me and all the sudden the car took off on me.”

Spatz took the lead from polesitter Kolton Guralski on the fourth lap and led the rest of the way, including holding off repeated challenges by Stankowski over the final ten laps.

Spatz was leading when a yellow flag with 10 to go allowed Stankowski to start outside of him on a double-file restart. Spatz cleared his fellow Wausau driver two laps after the restart though, but Stankowski looked high and low in the final laps but could never get underneath, and Spatz was a car length ahead on the final lap when the yellow came out and the race was declared official after Brandon Knoblock’s car stopped in the first turn.

“I’m extremely happy,” said Spatz after the race. “We worked with it tonight. We didn’t have the best car, were running on really old tires, but…I used Mitch up a bit, I’m not going to lie. We’ve been racing together a long time, so sometimes it happens.”

Tyler Custer has been knocking on the door of his first State Park Speedway feature win all season, and on Thursday he broke through, taking the 25-lap Rockstar Energy Drink Mini Stocks main event.

Custer drove all the way from the 12th starting spot to the front, passing early leader Steve Clark on the outside on lap 13 and leading the rest of the way. Custer finished eight car lengths ahead of Eric Breitenfeldt, who also posted his best-ever feature finish, edging Ashley Schoone for second.

Clark led early in the feature and had built a 10 car-length lead when Zach Budleski spun between turns 1 and 2. Evan Pingel had nowhere to go and hit Budleski’s car in the door with Chad Ferge and Kyle Check also collected. Budleski briefly had neck and back pain after the impact, but eventually exited his car and was OK.

Kendra Baumann won the mini stocks semi-feature, claiming her second semi win of the season. Baumann started on the outside pole and led all 12 laps, with Steve Koepke of Edgar outdueling Marathon’s Clayton Phillips to finish second.