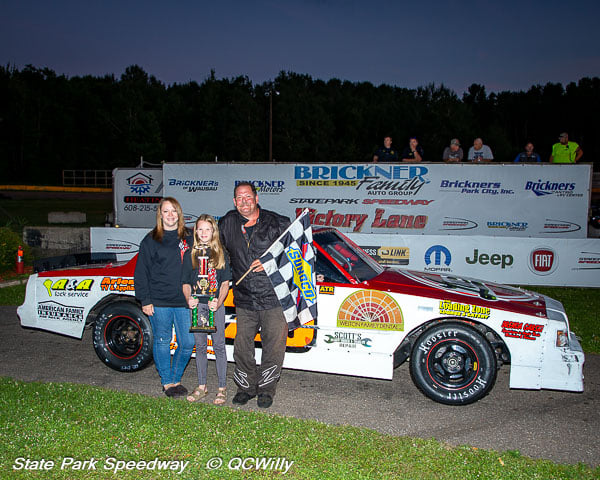 WAUSAU, Wis. (July 30) – Brian Schramm has rattled off one top-five finish after another this year at State Park Speedway. Still, there was no substitute for the Wausau veteran driver finally getting his first win.

Two-time defending Advance Auto Parts Pure Stocks champion Schramm finally broke through for his first feature win of the season, claiming the 25-lap feature Thursday night. Schramm won a feature at the track for the first time in almost a year and became the sixth different driver to win a pure stocks main this season.

“Been knocking on that door too long,” said Schramm after getting out of his car in a trackside post-race interview. “(Crewman) Robby (Schmirler) did a little change after the heat, I told him it was a little loose. He did whatever, I’ve got to thank that crew, those guys work their tails off…I needed to get this one, man, it’s been too long.”

Schramm came out on top at last after a long side-by-side battle with Jeff Spatz. The two raced for 15 laps with Spatz on the inside and Schramm outside of him, trading the lead five times as neither could shake the other. Schramm led laps 4, 5 and 6, Spatz edged ahead by inches on lap 7, Schramm led the next four laps and then Spatz rallied back to lead laps 12 through 14 before Schramm edged ahead again.

Schramm finally broke free when Spatz spun on the front stretch on lap 19, but he would have his hands full with another challenger. Mitch Stankowski started outside Schramm on the restart, but could not hang on the outside and Schramm went on to the win.

Marathon’s Greg Blount continued his dominance in the Snap-on Mini Mods class, winning his fourth straight feature. Blount claimed the 20-lap main event in the class, though it took him almost every lap to get to his final finishing spot.

Blount and the rest of the pack were stuck in traffic for almost the entirety of the race as John Lietz and Evan Call ran side-by-side in an outstanding battle on the front row for the first 16 laps. The two traded the lead seven times and were never less than a car length apart until Call drifted high in turn two, finally allowing Lietz to clear him.

That moment also provided an opening for cars right behind Lietz, with George Seliger lining up to take his shot at the lead. Before he could, though, Blount squeezed between him and Lietz, with just enough space to get to the high side of the leader. Blount would take the lead on the white flag lap and cleared Lietz on the last lap to win with Lietz second and Seliger third.

“It definitely was tight,” said Blount after of the race. “I had to ‘step on’ George real quick, because he’s just as quick. He made a bobble going into one and I took advantage and got underneath him and then I drifted a little high and took advantage.”

Tyler Custer won his second feature of the season in the Rockstar Energy Drink Mini Stocks, coming out on top of the 25-lap race to join Ashley Schoone and Garret Strachota as winners of multiple features in the class this season.

Custer got off to a good start, moving from his ninth starting spot to fifth in three laps. He continued to move up and took the lead from Schoone on lap 12, taking advantage of lapped traffic slowing her for a moment.

The Stratford driver led the rest of the way, towing Kyle Check by three car lengths for most of the final 12 laps. Check was within striking distance the whole way but unable to catch Custer and finished second, with last week’s feature winner Eric Breitenfeldt third, Strachota fourth and Schoone rounding out the top five.

“It was pretty loose, but we made the best of it,” said Custer. “The guys on the outside fell back a bit early, and we were able to move to the front.”

Weekly Thursday night racing at State Park Speedway takes a break next week. Instead, the track will host the TUNDRA super late model series next Saturday, Aug. 8, with pure stocks and mini stocks also racing on a non-points night. Fred Mueller Qualifying will begin at 6 p.m. and racing to follow at 7 p.m.