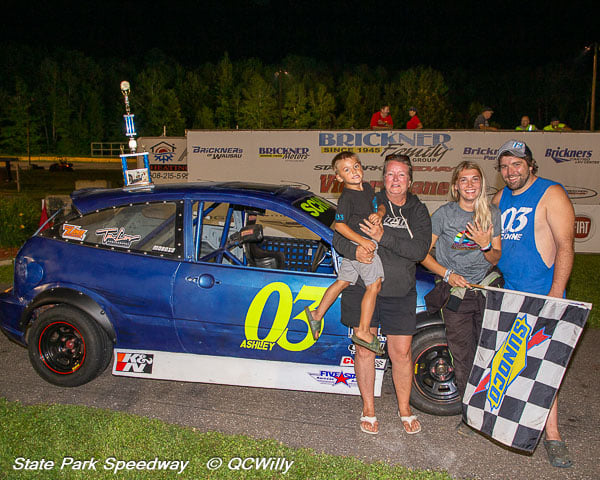 WAUSAU, Wis. (July 24) – As if winning yet another high-profile feature at State Park Speedway wasn’t enough for Ashley Schoone, a great night during the Larry Detjens Memorial got even better after she finished her racing.

Schoone won her third Rockstar Energy Drink Mini Stocks feature of the season at State Park and posted another victory in a memorial race at the track. Recently a Flip Merwin Memorial feature winner for the third straight year, she led all 25 laps to win the mini stocks main event on the opening night of the Detjens Memorial.

After the race, Schoone was met in Brickner Family Auto Group Victory Lane by boyfriend Conrad Lemmer, who got down on one knee and proposed to the 24-year old driver from Gleason. Schoone said yes, finishing her night with both a sizable trophy and an engagement ring on a night special to many in her circle. Conrad Lemmer’s mother is Margo Detjens, the daughter of Larry Detjens, the former Wausau racing star who was killed in a racing incident in 1981.

Schoone win also was nearly a 1-2 finish for daughter and father, as her father Mark Schoone raced behind her for most of the night. Mark Schoone moved into second behind Ashley on lap 3, and fought off one challenger after another to remain there for all but one of the next 21 laps.

Mark Schoone would eventually spin into the infield after contact with Eric Breitenfeldt while both raced for second coming to the white flag, but Ashley finished eight car lengths clear of the rest of the pack at the checkers. Ronnie Osborne of Fitchburg finished second for his best-ever finish at the track, with Breitenfeldt third.

A week after breaking through for his first feature win of the season, Greg Blount didn’t need long to notch his second. The 2019 Snap-on Mini Mods champion made it a clean sweep of the night by winning the 20-lap feature.

The Marathon driver inherited the lead with eight laps left after Kevin Tessmer spun in turn three while battling Blount for first. The defending champion pulled away quickly on the restart and finished well ahead of runner-up Noah Gajewski.

Tessmer had held his own on the inside for three laps in a side-by-side fight with Blount until coming in hot on lap 13 and spinning towards the outside wall in front of the field. The resulting scramble behind to avoid left Jim Lietz with nowhere to go but into the wall, and both Tessmer and Lietz’s nights were finished.

The nearly two-year long regular battle between Alex Hartwig of Portage and Wausau’s Jevin Guralski for supremacy in the Ropa’s Pizza Bandoleros continued Friday, and once again it was Hartwig getting the better end, fending off Guralski to win the 15-lap feature.

Hartwig took advantage when Guralski went high coming out of turn two on lap 9, making the pass and holding on to win by three car lengths. Hartwig won his second straight feature in the class this year, and the 2019 track champion has won five of seven Bando features at State Park dating back to last year, with 2018 division champ Guralski winning the other two.

Anna Malouf finished third in the feature, taking the top spot from early leader Avery Linnerud on a lap 5 restart and briefly leading before Guralski and Hartwig both passed her two laps later. Cohen Henze came home fourth and Tucker Bodendorfer was fifth.