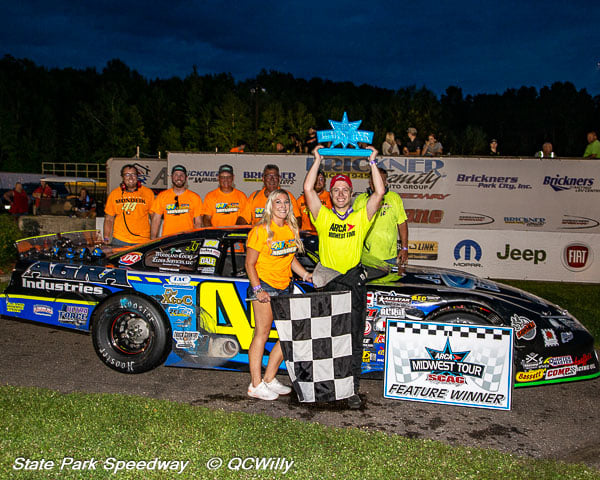 Already having his best season ever running super late models, Mondeik hooked his biggest prize yet. The Gleason driver won the 125-lap ARCA Midwest Tour Larry Detjens Memorial, continuing his dominance at State Park Speedway this year and adding his name to a long list of greats to win the long-running memorial at the track.

Mondeik won the Detjens race for the first time, becoming the 25th different driver to win the event in its 39 runnings. He also posted a long-awaited first-ever win on the ARCA Midwest Tour and won his eighth super late model feature of 2020, adding to a collection of trophies that also includes the Flip Merwin Memorial at State Park and the Stateline Challenge at Norway Speedway in Michigan.

Mondeik made his move on lap 83, working underneath Brock Heinrich for the top spot just after a restart. He led the rest of the way, pulling ahead on three restarts over the final 41 laps and winning by six car lengths over Dalton Zehr and a strong field of 27 cars on a steamy night at the Rib Mountain 1/4-mile oval.

“Yeah, it definitely feels really good,” said an exhausted Mondeik after the race. “What a race with the 119 (Zehr) and the 52 (Heinrich), I just can’t thank my sponsors and my crew enough…what a race.”

Mondeik ran in the top five almost the entire way but for the first two-thirds of the contest was among the many chasing Zehr and Heinrich, the latter of who appeared to have the field covered until a caution flag well past the halfway point.

Heinrich took the top spot from Zehr on lap 25 and led the next 57 laps, looking to be on the way to his first-ever super late model feature win as he continued to build his lead over second-place Gabe Sommers, the 2019 Detjens champion. Heinrich worked lapped traffic smoothly and was up to a 10-car length advantage by lap 75, while Sommers stayed ahead of Mondeik and Zehr running close behind.

The race changed on lap 82 when Jeff Storm and Jeremy Lepak briefly collected running side-by-side on the front stretch and John DeAngelis Jr. spun, bringing out the race’s fifth of eight cautions. Sommers chose to start behind the leader Heinrich, allowing Mondeik to start on the outside of the front row.

Heinrich led the first lap after the restart, but Mondeik was able to make a move to get inside Heinrich a lap later. The two cars banged door-to-door for the next two laps, but Mondeik led lap 83 by half a car length and that came in handy when the yellow came out again after Greg Borchardt spun in turns three and four.

With the inside lane on the following restart, Mondeik cleared Heinrich quickly and would not be caught again. He slowly built his lead getting a strong run off the corners and had no problem with two more restarts late, including one with Zehr on his outside with 25 laps left and a single-file restart with seven laps to go.

Zehr would settle into second ahead of Heinrich after the lap 101 restart and would remain there the rest of the way. Heinrich finished third, with Sommers fourth and Minnesota’s Jonathan Eilen fifth, holding off Chris Weinkauf in a spirited battle over the final laps.

“Second is never a bad day, but it’s never the day you want,” said Zehr after the race. “About 10 laps in we started losing forward drive, and I just took care of the right rear and that’s the only reason we were able to get back to those guys.”

“We didn’t come with the highest expectations…we didn’t know exactly where the car was going to be,” said Heinrich afterwards. “The car came around in the heat, I thought we had something for them and we definitely did, it was just a matter of getting all those consecutive green flag laps.”

A total of 16 cars finished on the lead lap. A number of contenders were slowed or eventually sidelined by incidents, including a chain reaction on the first lap that saw fast qualifier Dan Fredrickson, Rich Bickle Jr., Dillon Hammond and Travis Volm all suffer damage. Hammond would complete just two laps before retiring, Volm exited after 19 laps, Fredrickson completed 49 laps and Bickle was running in the top 10 until breaking and going into the third turn wall on lap 101.