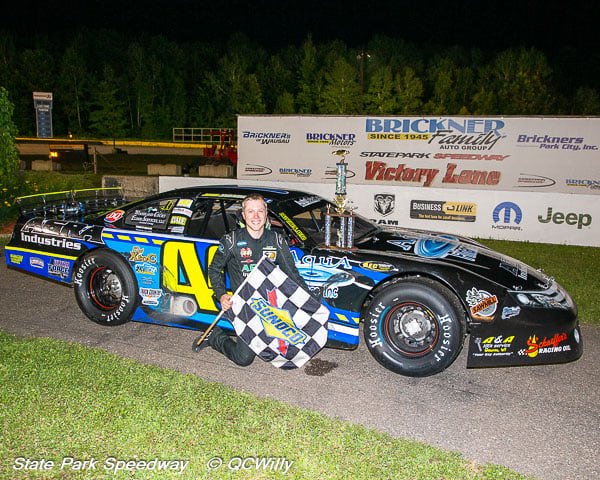 WAUSAU, Wis. (July 16) –  After being in strong contention each of the last two years, it appears to be all coming together for Justin Mondeik this summer.

A two-time season points runner-up at State Park Speedway in the Auto Select Super Late Models presented by C-Tech, Mondeik has established himself as the clear car to beat so far in 2020. The Gleason driver won his third feature of the season in five starts, taking the 60-lap main event on Women Concerned for Auto Racing Gifts From Heaven Night at the track.

Mondeik started ninth in a field of 11 super late models but passed M.G. Gajewski for the lead on lap 22 and was unchallenged the rest of the way in winning his sixth feature of the season overall. His list of wins includes the Flip Merwin Memorial at SPS plus the Stateline Challenge at Norway Speedway in Michigan.

“Yeah it’s been pretty good all year, everywhere we’ve went with it,” said Mondeik. “It’s hooked up really good, we’ve got it handling really good. It lasted on the long runs, that’s the difference.

“The heat race we tried some things, didn’t like what we had there so we went back to what we have been running all year and were able to make it handle good enough on the top to make the passes we needed.”

Mondeik needed just five laps to move from his ninth starting spot to fourth in the early going. Luke Fenhaus scraped the wall on the frontstretch after completing just one lap, and he eventually stopped on the track to bring out a caution on lap 3. Mondeik lined up seventh on the restart, but moved up a row after Dillon Mackesy spun on the first attempt at restarting, sending him to the back of the pack.

Jeremy Lepak led the first four laps before Gajewski took over on lap 5. He would hold the lead the next 16 laps running a high line on the straightaways, but Mondeik worked his way past Lepak for second on lap 16 and was inside Gajewski five laps later, taking the lead one lap later and quickly driving away.

Gajewski would slow and stall with engine problems on lap 33 after running third, but Mondeik had no trouble on a pair of restarts in the second half of the race, easily pulling away both times.

Brock Heinrich finished a career-best second in the feature, while Minnesota driver Dan Fredrickson came home third, bumping past Mackesy late. Mackesy was fourth and Travis Volm rounded out the top five. Fast qualifier Mike Olson of Dorchester was sixth, while Eric White of St. John, Ind., also made his first-ever appearance at the track and came in seventh.