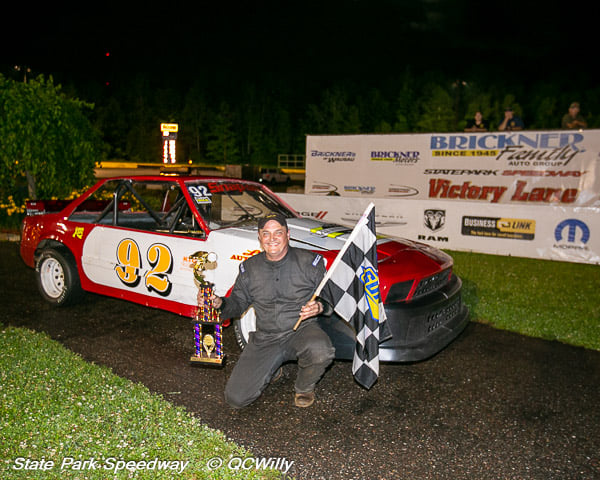 WAUSAU, Wis. (July 2) – It was a great night for families at the front of features at State Park Speedway.

The super late model feature wasn’t the only family affair Thursday night, as another of the track’s most respected racing families battled it out for first in the Snap-on Mini Mods. Mosinee’s John Lietz and his son Jim Lietz ran side-by-side for the final eight laps of the 15-lap feature race, but father bested son as John ran first at the checkers by less than a car length to capture his first feature win since 2017.

John Lietz led all 15 laps of the feature from the outside pole but had to ward off both his son and fast qualifier and defending mini mods champion Greg Blount. Hungry for his first win of the season, Blount was right behind John Lietz the final eight laps, but could not get around the front two racing door-to-door.

Jim Lietz closed in over the final laps, and the two were virtually even at the white flag. John Lietz got a strong run on the backstretch, though, and held on to win by less than a car length with Blount third.

Dave Cabelka earned his first feature win of the season in the Advance Auto Parts Pure Stocks, claiming yet another exciting main in the division.

The pilot-by-day for Wausau Flying Service won a six-lap side-by-side battle with Brian Plisch of Athens, taking the lead on lap 14 and clearing Plisch two laps later. Cabelka also held off Brian Schramm on a restart with two laps left to win the 20-lap event and cap a night where he also won his heat race.

Cabelka patiently worked his way through early traffic, as a number of cars shuffled early trying to overtake Plisch, who was strong running on the inside and led 12 of the first 13 laps. Cabelka eventually worked past early challenger Kole Ferge for second on lap 8 and made the pass of Plisch on the outside. Schramm finished second and Nick Grish of Wausau was a season-best third, while Plisch finished eighth of 10 cars after a late-race spin after contact from Jeff Spatz while both raced for second.

Patience also paid off for Garret Strachota in the Rockstar Energy Drink Mini Stocks feature. The Wausau driver ran second to for most of the 20-lap race before passing Brad Lecher for the lead with five laps left and going on to his second feature win of the season.

Strachota was in contention the whole way, starting on the outside of the second row and never falling outside the top three, but he followed behind first early leader Evan Pingel and then by Lecher, who took the top spot from Pingel on lap 8.

Lecher led the next seven laps running a high line coming out of the corners, but Strachota eventually took advantage to pass Lecher on the inside on the backstretch and led the rest of the way. Ashley Schoone of Gleason finished second and Kyle Check of Shantytown was third, while Lecher wound up 13th in the 14-car race after spinning on the final lap.

Mosinee’s Amanda Rowe won the 15-lap mini stock semi-feature, holding off Jason Hopinka after the two raced side-by-side for the final four laps. Rowe edged Hopinka by half a car length at the finish and wound up leading all 15 laps of the semi.

Racing at State Park Speedway will take a break next week, returning the following Thursday, July 16, for WCAR Gifts From Heaven Night. The program will include super late models, pure stocks, mini mods and mini stocks. Fred Mueller Qualifying will begin at 6 p.m. and racing will follow at 7 p.m.