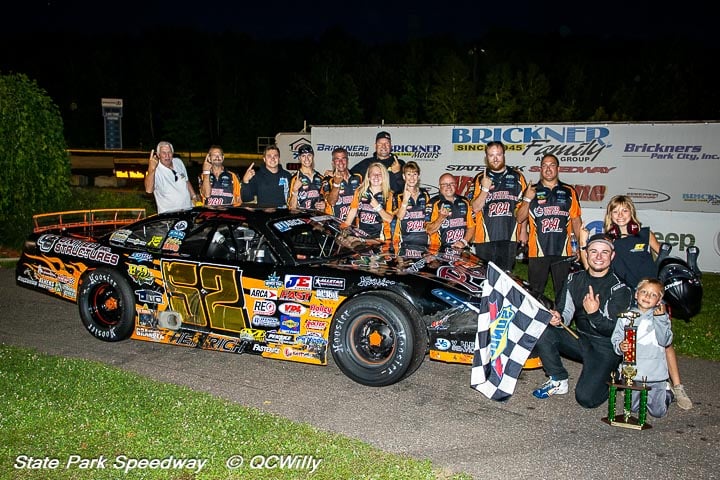 WAUSAU, Wis. (July 30) – Justin Mondeik and Brock Heinrich staged a fierce battle at the front of the pack at State Park Speedway on Saturday that had all the indications that it wouldn’t be their last.

It took all of five days for the two to square off again. There they were Thursday night, lined up side-by-side for a restart with 11 laps left in the 50-lap Auto Select Super Late Models pres. by C-Tech feature.

This time, though, the outcome was different, as Heinrich would pull ahead after a two-lap, paint-swapping fight and go on to his first-ever super late model feature win, capping a climb over the last two years from class rookie to contender to feature-winner.

Heinrich earned a measure of revenge after Mondeik overtook him on his way to winning the 125-lap Larry Detjens Memorial ARCA Midwest Tour race on Saturday. Heinrich also came out best in a terrific three-car race between those two plus Dillon Mackesy over the final 25 laps of the main event on Christmas in July Night at the track.

“This is cool, I’ve said it’s cool a couple times in my life, but this is redemption for last week, I wasn’t going to let anyone else have it,” said a jubilant Heinrich after the race. “We rubbed a little bit here and there but that’s good hard racing.

“I had a good time racing with my buddy Dillon. Mondeik raced me hard, I raced him hard, but this time, we’re going to keep this one.”

Heinrich and Mondeik started on the front row on a lap 40 restart just after Mark Mackesy had spun in turns one and two. Mondeik got a good jump at the drop of the green, with a one-half car length lead going into turn one, but Heinrich refused to cede ground. The two cars made contact on more than one occasion over the next two laps, including both getting sideways going into turn one on lap 41. Heinrich cleared Mondeik soon after, though, and he went on to a six-car length win.

The race saw Mackesy lead the field for most of the first 25 laps, fending off Mondeik lurking in second before a competition caution was thrown on lap 26.

The fun started soon after, with Mondeik challenging Mackesy on the outside right after the restart. Mondeik has dominated super late model racing at the track this year with three feature wins in weekly racing plus the Detjens Memorial win, but the third-generation driver Mackesy was up to the task. Also in pursuit of his first-ever super late model feature win, Mackesy took the lead back on lap 28 and cleared Mondeik a lap later.

Heinrich would follow Mackesy to the front, into second place with Mondeik third. The three would run nose to tail until Steve Lichtfeld spun on lap 39, setting up a restart with 12 laps left with Heinrich lined up outside the leader.

The two would race side-by-side for one lap, but Heinrich held an ever-so-slight lead-just four thousandths of a second-as the two completed lap 39. That would come in critical just seconds later, when Mark Mackesy spun. With cars reverting to their position at the end of the last completed lap, Heinrich was in first ahead of Dillon Mackesy and thus had choice of where to start on the restart. Heinrich chose the inside, Mackesy elected to start behind him and Mondeik moved up to start alongside the leader, setting up the final dramatic restart.

Dillon Mackesy would wind up second for his third runner-up finish of the season with Mondeik third. Travis Volm finished fourth and Lichtfeld added a fifth-place finish in his first appearance at the track this season.