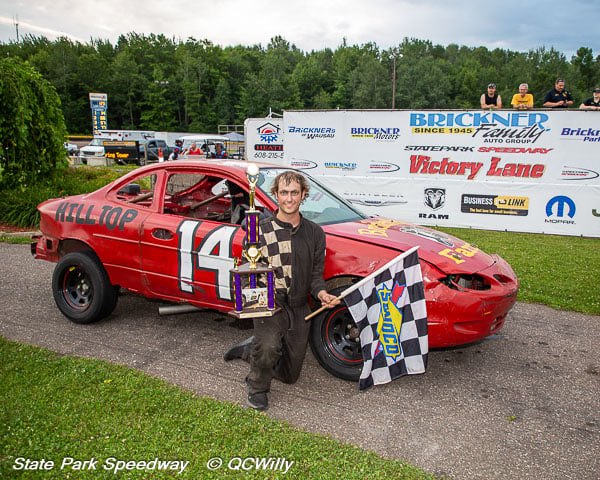 Eric Breitenfeldt returned a familiar name and number to the front, breaking through in the Rockstar Energy Drink Mini Stocks class for his first-ever feature win at SPS Saturday night. Breitenfeldt passed Dave Lembke on lap 22 and went on to win the 25-lap race and becoming the sixth different feature winner in the class this year.

Driving with the same number-but a different paint color-Eric joined his uncle Wayne Breitenfeldt and cousin Brett Breitenfeldt on the list of feature winners at the track. Wayne won numerous features at the track in late models and hobby stocks driving his yellow No. 14 car in a career that included eight late model track championships, and his son Brett also won in mini stocks.

Eric Breitenfeldt has been getting faster by the week in his first full season in his red No. 14 car. He won a heat for the first time a week earlier, and also won his first-ever feature a week earlier at Norway Speedway in the Upper Peninsula of Michigan.

Breitenfeldt foiled a good showing by the visiting driver Lembke, who came up from Germantown to race the weekend in both mini stocks and mini mods and led seven laps in the feature. Lembke at first held off a challenge from points leader Garret Strachota after a lap 16 restart, but Breitenfeldt took the top spot with a crossover move, first looking high before diving low to get inside the leader.

Breitenfeldt came from well back in the field of 14 cars to win. He started 11th and didn’t move into the top five until lap 14, but made his move late after the race’s only caution three laps later. Breitenfeldt passed Ronnie Osborne for third on lap 18 and Strachota for second a lap later before setting his sights on the leader. Lembke finished second with Tyler Custer coming in third.

Dave Cabelka continued to make the most of his periodic appearances in the Advance Auto Parts Pure Stocks. The Wausau driver won his second feature of the season in the class, chasing down Brandon Knoblock late in the 20-lap event.

Cabelka’s patient run paid off as he passed Knoblock on lap 15 and paced the pack the rest of the way. Kyle Genett would finish second with Knoblock coming across third after leading the first 14 laps.

Cabelka started third in the field but was unable to overtake Knoblock on an early restart three laps in after the cars of Kolton Guralski and Jeff Spatz hooked together side-by-side on the front straight. Cabelka then raced side-by-side with Kole Ferge for six laps before moving into second. Knoblock held a five-car length lead at that point, but Cabelka closed in on him and took advantage when Knoblock slipped high on lap 15.

It was a second straight sweep in the Snap-on Mini Mods for Marathon’s Greg Blount, who won his third feature this season and third straight in the last l0 days at the track. Blount doubled up on Detjens sweeps, also setting fast time and winning his heat for the second straight night.

Blount took the top spot on lap 14 from Evan Call, who drifted high out of turn four after a good run leading from the inside pole for the first 13 laps. Earlier, Blount was locked in a side-by-side battle with George Seliger for the better part of eight laps, but once in front he sailed away to win by almost a full straightaway over Seliger with Gary Garand placing third.

Alex Hartwig also continued his dominance in the Ropa’s Pizza Bandoleros, winning his third straight feature this season. The Portage driver needed just seven laps to move from his eighth starting spot to the lead, overtaking Paxton Benz for first on lap 7 and cruising to his third straight win.

Hartwig positioned himself for a run at the top spot three laps earlier, when he got inside regular top challenger Jevin Guralski on the backstretch to move into third. He also made passes inside of Tucker Bodendorfer for second and then for first after Benz had led the first six laps. Guralski finished second with Bodendorfer coming in third.

Along with the action they provided on the track, it was a night of giving back off the track by many State Park drivers. A number of racers took the lead in raising money for fellow driver Steve Clark, who was injured in an accident Friday night and was taken to Madison for surgery. Clark is recovering in Madison, and between donations by drivers and fans nearly $3,000 was raised for Clark’s medical expenses and recovery.

State Park Speedway is back to regular Thursday night racing next week July 30 with Christmas in July. Auto Select Super Late Models pres. by C-Tech, pure stocks, mini mods and mini stocks all will race with Fred Mueller Qualifying at 6 p.m. and racing to follow at 7 p.m.