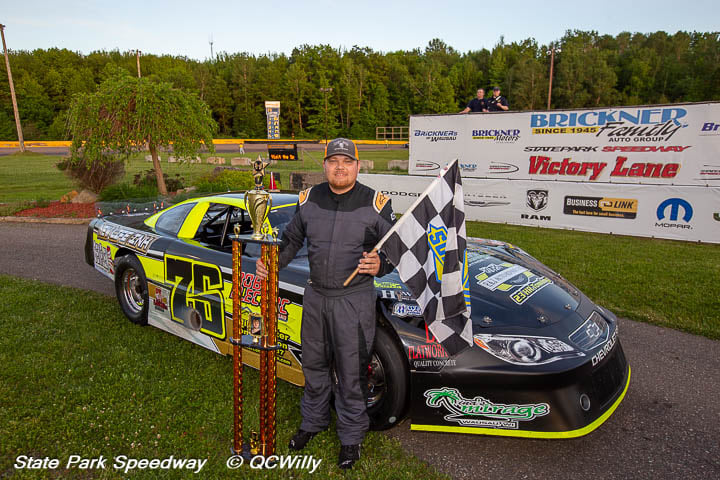 WAUSAU, Wis. (June 4) – Travis Volm continued to be strong in Central Wisconsin Racing Association races at State Park Speedway, while John Beale continued to make the most of his rare appearances at the track.

Volm and Beale both were victors in twin CWRA Stars to Legends Tour super late model features Thursday night at State Park, with Volm winning the first 35-lapper and Beale taking the second. It was Volm’s third CWRA win at the track since the beginning of 2019, while Beale won for the first time in the series in his first season on the circuit.

Volm set fast time in the CWRA field and quickly came from the eighth starting spot to take the lead. He moved into third place by lap 4, passed two-time defending series champion Jeff Weinfurter three laps later, and overtook Monte Gress for the lead on lap 9.

Volm built a comfortable lead from there and said he was mostly saving his car for a possible challenge at the end, and it came in the final laps. Wausau’s Mark Mackesy got by Weinfurter on the outside on lap 26 and closed in on Volm but finished two car lengths back at the checkers, with Beale behind him in third.

The eighth starting position also was where Beale came from in winning the second feature. The native of Verona won a tough battle with Mackesy for second and then quickly chased down leader Paul Paine and made the pass for the lead with six laps left.

Beale also pulled away from Paine on a restart with five laps remaining and drove away for his second feature win in central Wisconsin this season and second-ever at State Park Speedway. He also won a Wisconsin Challenge Series event at State Park a year ago and was winner of the Dick Trickle 99 race at Golden Sands Speedway last week on Memorial Day.

Volm was running sixth late in the race before Harley Jankowski’s spin on the front stretch on lap 30, but he capitalized on the yellow to finish second. Volm started fourth on the restart after several others ahead of him chose the inside lane, and he passed Mackesy for third and Paine for the runner-up spot in the closing laps. Weinfurter finished third and Mackesy came in fourth, while Paine placed fifth after taking the lead from the inside pole and leading much of the race.