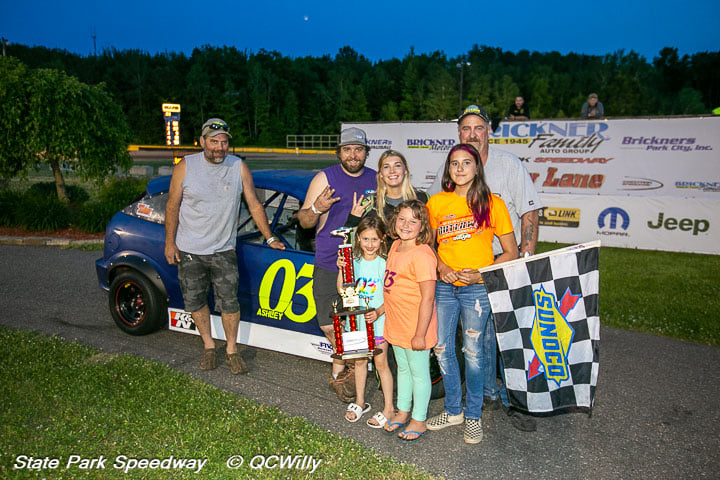 Schoone won the Rockstar Energy Drink Mini Stocks feature at the Flip Merwin Memorial for the third straight year, leading wire-to-wire to go back-to-back-to-back in the Merwin and also take her second feature this season.

Schoone started from the inside pole and took the lead on the first lap. She fended off Garret Strachota for most of the race and then held off a final run by fast timer Tyler Custer.

Strachota tracked behind the leader from the third lap onward but could never get around as Schoone navigated lapped traffic smoothly. Custer got by Strachota with four laps left and got as near as Schoone’s bumper as the cars took the white flag but no closer.

“Yeah I had a lot of pressure from my dad, he kept telling me I had to make it three in a row, three in a row,” said Schoone of the good-natured ribbing from her father Mark Schoone, who she also races against on the dirt at Tomahawk Speedway.

Schoone won her fifth race overall of the season at State Park, most of any driver at the track. She did it in a car that she said may not have been completed in normal circumstances but was worked on and completed during plenty of free time available at home during the COVID-19 pandemic.

It was also Schoone’s sixth feature win at SPS over the last three seasons. The full-time beauty school student and working mother of a young son also is now within 17 of points leader Strachota after four weeks of racing, and with continued success will have a chance at an asphalt track championship one year after she won the hornets track championship on dirt at Tomahawk Speedway.

A brief hairy moment proved to be the break Wausau’s George Seliger needed to win his second Snap-on Mini Mods feature of the season.

Seliger was running second behind Gary Garand of Weston on the 12th lap of the 20-lap race when Garand’s car got way out of shape coming out of the fourth turn. He slid and eventually tagged the outside wall, with Seliger and third-place Noah Gajewski both checking up hard.

Seliger was the first of the three cars to regain momentum, and all three cars remaining were able to keep going so no caution flag came out. Seliger would lead the rest of the way with Greg Blount outdueling Gajewski for second and Garand finishing fourth.

Kyle Genett again made the most of his occasional appearances at State Park Speedway so far this year. The talented driver on dirt and asphalt from Rangeline claimed his second feature in two races this season in the Advance Auto Parts Pure Stocks, leading all 25 laps in winning. With the win, Genett also captured the 100th feature win of his career that has included wins in everything from asphalt late models to dirt street stocks.

Genett started on the outside of the front row and shot into the lead early and withstood a number of restarts late. He was strong on the inside and pulled away on four restarts in the final 11 laps to win in the car driven by Mitch Stankowski the last two weeks. Dave Cabelka finished second and Alex Volm passed Brian Schramm for third on the final lap.

Alex Hartwig and Jevin Guralski spent most of their Bandolero features at State Park Speedway battling for supremacy last year, and the two were at it again Thursday night.

Hartwig got the better of Guralski just as he did in three of last year’s five feature races at SPS, winning the 15-lap feature. The youngster from Portage passed Wausau’s Paxton Benz for the lead on lap 7 and held off Guralski’s attempts looking high and low in the final laps to win in the Bandoleros’ first appearance at the track this year.

Racing continues next Thursday with the Dave Lashua Memorial, with the Central Wisconsin Racing Association Stars to Legends Tour late models making their second appearance at the track this season. Pure stocks, mini mods and mini stocks also will all be in action. Fred Mueller Qualifying will begin at 6 p.m. and racing will follow at 7 p.m.