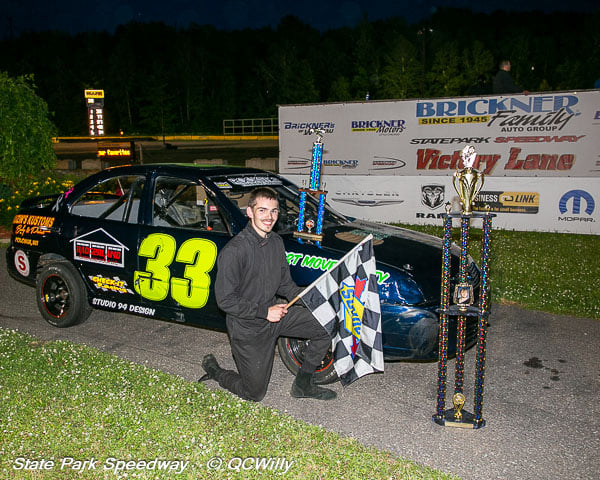 WAUSAU, Wis. (June 25) – George Seliger made a slick move to get to the front for the second straight week, while Alex Volm and Kyle Check saw their fast cars come through with feature wins for the first time this season at State Park Speedway Thursday night.

Just as he did a week earlier, Seliger again took advantage of another driver’s slight misstep to get to the front. Leader Noah Gajewski slipped up in turns three and four on lap 13, briefly shooting up the track, and Seliger pounced to move past him and take the lead.

The Wausau driver would quickly pull away from there and finished a straightaway ahead of second-place Kevin Tessmer of Wausau in the 20-lap race. The three-time mini mods champion from 2016-18 became the first driver at the track this season to win three feature races.

Greg Blount finished third in the feature for his fifth top-three finish of the season. Gajewski settled for fourth after leading five laps during a side-by-side duel with early pacesetter John Lietz, who led the race’s first six laps but came in sixth.

Volm opened the evening setting fast time in the pure stocks for the fourth time in five weeks, and he closed it holding off Brian Schramm in yet another exciting race in a pure stock division that has been filled with them this year.

Volm took the lead from Kolton Guralski on lap 13 of the 25-lap feature, just one lap after Guralski had finally wrestled first away from early leader Brian Plisch. Volm would pull out to a six car-length lead and appeared in shape to cruise to the win until Schramm made a late charge.

The two-time defending pure stock champion suddenly sliced Volm’s lead to nothing with five laps to go, getting to the leader’s bumper. Schramm would try outside and inside against Volm, who said his car got loose at the end of the race, but he had just enough left to stave off Schramm and win by 1 1/2 car lengths at the finish.

Like Volm, Check has been strong this year in qualifying, setting fast time twice in the mini stock class. Often fighting traffic deep in the field, though, he had one top-three finish in four features before Thursday.

The Shantytown driver slipped inside Amanda Rowe for the lead on lap 5 of the 25-lap feature, and he would lead the rest of the way despite a number of capable cars behind him. Garret Strachota was only a few car lengths back most of the race and within striking distance, but Check continued to run smooth laps and navigated lapped traffic late for his second career feature win.

Racing is back again next Thursday with another full racing program including the Auto Select Super Late Models, pure stocks, mini mods and mini stocks, plus fireworks at the conclusion of the evening. Fred Mueller Qualifying will begin at 6 p.m. and racing will follow at 7 p.m.