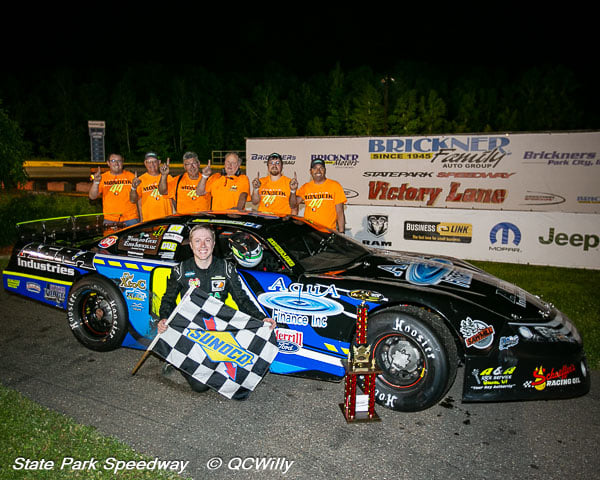 WAUSAU, Wis. (June 18) – There was little that was going to get in the way of Justin Mondeik Thursday night at State Park Speedway.

A talented group of super late model drivers filled with track champions and previous Flip Merwin Memorial winners couldn’t prevent Mondeik from scoring one of the biggest wins of his racing career, as the Gleason native won the 100-lap feature in the 17th annual Merwin Memorial.

Mondeik had the field covered, leading 78 of 100 laps to win the Flip Merwin Memorial for the first time. He took the lead from Merrill’s Chris Weinkauf on lap 23 and never trailed again, leading the final 78 laps.

Mondeik held a comfortable lead for almost all of the final 65 laps and pulled away at the end to finish 10 car lengths ahead of Stratford native and NASCAR Gander RV & Outdoors Truck Series regular Derek Kraus. Weinkauf finished third, with Brock Heinrich of Wausau and Plover’s Gabe Sommers rounding out the top five.

“Yeah, the thing was on rails right away from the beginning of the night,” said Mondeik. “Definitely very stoked to get this win…we’re glad to finally get this one done.”

The field spread out after the first 20 laps, after a pair of early cautions. The first came on lap 16 when Dillon Mackesy’s engine blew, ending his night.

The second came just one lap later and ended a promising run for Travis Volm. The Mosinee driver led the first 15 laps from the inside pole, including staying ahead of three-time defending Merwin champion M.G. Gajewski in a side-by-side battle. Volm’s night was done less than a lap after the lap 16 restart, though, as he slowed and eventually stopped on the track with a broken trailing arm.

Weinkauf would get a good jump outside Gajewski on the lap 17 restart and would lead the next five laps. Mondeik followed right behind Weinkauf into second by lap 20, and three laps later would pass him on the outside for the lead.

Kraus came back to his home area from the NASCAR Truck Series, where he is currently 11th in the point standings. He would stay within striking distance of Mondeik for a good share of the race, but the 2016 Merwin winner could get no closer than second. Three-time Merwin winner Weinkauf had a strong run with a heat win and a third-place finish his first time out this season while driving the car Jay Van Der Geest piloted to a State Park Speedway track championship last year.

Gajewski had won the event each of the previous three years and appeared to be a contender early, but he faded and finished ninth. He was involved in many of the best side-by-side battles of the race, including eight laps running side-by-side with six-time Elko (Minn.) Speedway champion Jacob Goede, who would finish eighth.

MUST register for Kids' Bike Races by 7pm1