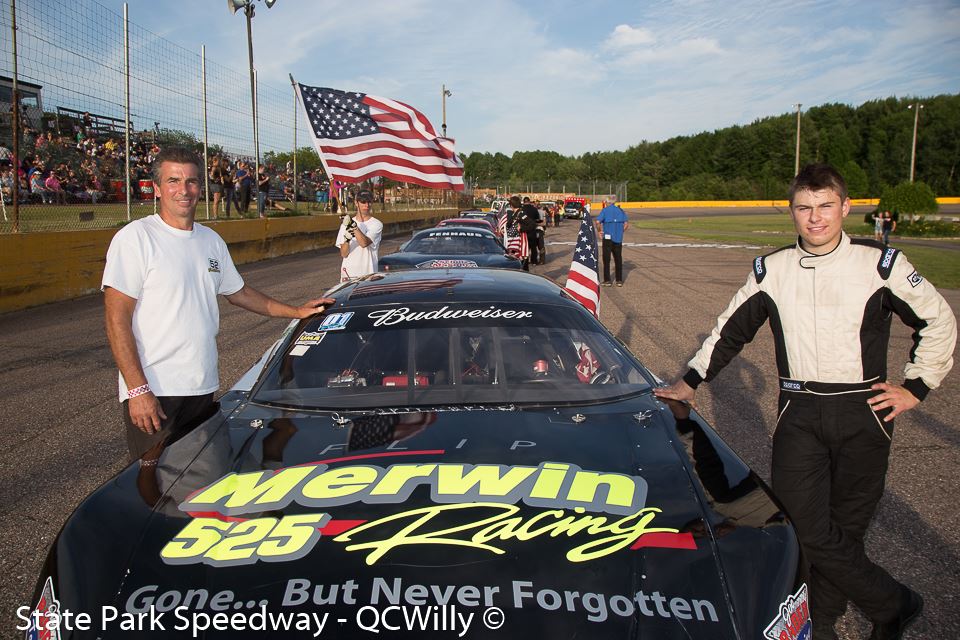 Even nearly two decade later, many competitors at State Park Speedway have a connection to Merwin, who will be remembered again at the track this Thursday. The 17th annual Philip (Flip) Merwin Memorial takes place this week at the 1/4-mile asphalt track at the base of Rib Mountain.

The Merwin race will be led by a 75-lap feature for the Auto Select Super Late Models presented by C-Tech. The Advance Auto Parts Pure Stocks, Snap-on Mini Mods and Rockstar Energy Drink Mini Stocks will also be on hand, and the E.H. Wolf & Sons Bandoleros will also race at the speedway for the first time this season. Feature races will be streamed live on Speed51 for monthly and yearly subscribers.

The Flip Merwin Memorial started in 2003 in honor of Philip (Flip) Merwin, a former snowmobile racer, pit crew member, race fan and stock car driver who was killed in a snowmobile racing accident in January 2003. Flip was a close friend of State Park Speedway owner Scott Wimmer and the Wimmer family. The race in his memory quickly became one of the track’s signature events and continues to be today.

“We’re excited to have the race honoring Flip,” said Scott Wimmer. “Time sure flies, but it’s great to see all the support in honoring someone who truly cared about racing and everyone he encountered.”

The race is one that a number of drivers mark on their calendars every year, as many racing at the track have a personal connection to Merwin. M.G. Gajewski, who has dominated the event of late, talked after his first win in 2016 of being a friend of Merwin and working with him. Super Late Model driver Travis Volm piloted a former Merwin car to a Limited Late Model feature win in the Merwin race in 2018. Pure Stock competitor Brian Schramm’s first car was lettered by Merwin.

Wausau Super Late Model racer Brock Heinrich carries Merwin’s name above the passenger’s side window on his car, and his No. 52 is a tribute to Merwin’s notable 525 he used racing snowmobiles. His father used to work on the pit crew for Merwin’s snowmobile, and he traces his family’s first involvement in racing to him.

“Flip played such a huge role in my family’s involvement in racing since the very beginning,” said Heinrich. “The only immediate ties we ever had to racing before I started was through him and his snowmobile racing team when my dad used to help pit for him. My dad was happy to call him one of his best friends and for very good reason.

“To win the Flip Merwin Memorial is our ultimate goal. It’s circled on the calendar as soon as the schedule comes out, and we know we have to be completely prepared and ready to rock when we unload on Thursday. It would mean the world to my family, my team, and I if we could pick up that victory in his honor. I’m sure it would be an emotional win as well. There is is no other race I would like to win more.”

Among those expected to join Heinrich include Gajewski, who is the three-time defending race winner. A field loaded with star power also includes Stratford’s Derek Kraus, a full-time competitor on the NASCAR Gander RV & Outdoors Truck Series, where he sits 11th in the point standings.

Kraus was the 2016 Merwin champion, and past winners joining him and Gajewski this year include Chris Weinkauf, Mark Mackesy and Jeremy Lepak. Weinkauf is a previous three-time winner of the event and will drive the car of 2019 SPS Super Late Model champion Jay Van Der Geest. Mackesy is a two-time winner of the race, and Lepak is a former track champion, won the second-ever Merwin race in 2004 and also is the most recent feature winner at the track.

State Park Speedway regulars such as Volm, current points leader Justin Mondeik, Dillon Mackesy and Mike Olson also are among those expected to be on hand to race.

All five classes racing Thursday will have drivers going for their third consecutive Merwin Memorial feature wins. Along with Gajewski’s three-peat last year, Schramm (Pure Stocks), Greg Blount (mini mods), Ashley Schoone (mini stocks) and Jevin Guralski (Bandoleros) all won Merwin features in both 2018 and 2019, and all are slated to compete again Thursday.

SPS also will have lap sponsorships available for feature races for all divisions, with the sponsorship money going to the driver who led that lap. Lap sponsorships start at $10, but can be any denomination $10 or more, and businesses or fans can sponsor more than one lap or have multiple sponsors per lap. Those interested in a lap sponsorship or bonus sponsorship can contact the State Park Speedway Facebook page or SPS Marketing, Sales and P.R. Director Jana Wimmer.