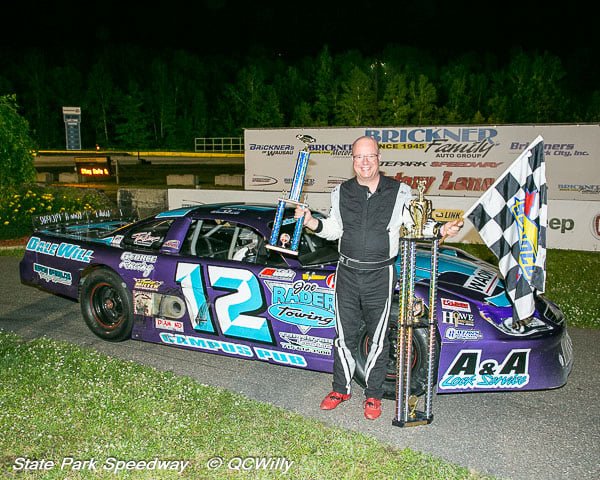 For Paul Paine, it was his first-ever feature win at the track, and his first in a CWRA race. For Mark Mackesy, it was a win pushing his lofty career total at SPS past one of the foremost legends in its history.

Paine and Mackesy were winners of twin 35-lap features Thursday night. Paine claimed the first feature while Mackesy won the second as part of the Dave Lashua Memorial and Kids Night at the speedway.

The Mound, Minn., native Paine chased down and passed Verona’s John Beale for the lead at the halfway point and led the rest of the way, twice pulling away from Beale on late-race restarts. A regular traveling across the state border to race with the CWRA since last year, Paine broke through for his first win on the tour after having been close a number of times before, including a second-place finish in this year’s series opener at Dells Raceway Park in May.

“It’s my first win in this series,” said Paine in a trackside post-race interview. “Last year we came close a lot, two seconds, thirds, just could never pull it off…finally got one.”

Mackesy passed Travis Volm on a lap 3 restart in the second feature to take the lead and was in front the rest of the way. He pulled away from the field and easily worked through lapped traffic in the final laps for his second CWRA feature win this year and first of the season at State Park.

The win also was Mackesy;s 57th feature at SPS and moved him past Tom Reffner and into second place on the track’s all-time late model feature win list. Only Dick Trickle has more feature wins at the track than Mackesy.

“Yeah, that sounds pretty neat, he’s one of my heroes for sure,” said Mackesy after the race. “Even to be considered with him, names like that, I grew up watching…I remember thirty years ago, all I wanted to do was finish in the top five with those guys.”

Mackesy got to the front quickly in the second feature after the race was marred on the second lap by an accident that damaged half of the 16-car field. Outside polesitter Dakota Blakeslee’s car lost an engine as the cars entered turn one, and oil on the track resulted in Blakeslee, Glen Bush, Dillon Mackesy, Mike Sievers and Tyler Wusterbarth all going into the wall and suffering heavy damage. A lengthy red flag and cleanup was needed and all five as well as Brett Breitenfeldt were unable to continue, while Paine and Volm also sustained damage but would remain in the race.

Paine capped a terrific night by finishing runner-up to Mackesy in the second feature, as his crew repaired rear end damage after the early wreck and he later got by Volm for second with eight laps left. Volm finished third, while Minnesota’s Adam Oxborough held off Beale after a long battle to finish fourth with Beale fifth.