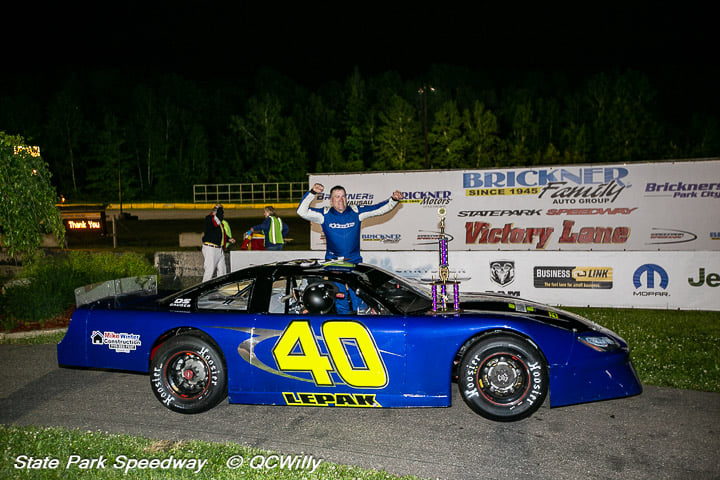 Lepak claimed the 60-lap Auto Select Super Late Models feature Thursday night on the third night of racing this season at State Park. The former track champion led the final 48 laps for his first feature win at the track since 2015, capping a program that was completed despite passing rain showers wiping out some of practice and also slightly delaying the start of racing after qualifying.

Lepak took the lead from Dillon Mackesy on lap 13 and led the rest of the way. He kept his car pinned to the bottom of the track and consistently got a strong run off the corners, rebuffing challenges by Justin Mondeik and Luke Fenhaus.

Fast qualifier Mondeik took a shot on the outside on a lap 19 restart but fell back after five laps and eventually went to the back after taking responsibility for a spin of Mackesy on lap 35. Fenhaus was behind Lepak most of the final 25 laps, twice trying the outside including a final attempt with seven laps to go before fading late.

Lepak has competed on a part-time basis at SPS in recent years but has been out at the track testing regularly on Tuesday nights. He also dedicated the win to his late aunt Ika Volm, who passed away earlier this week.

“It’s definitely for my whole family, and for my aunt,” an emotional Lepak said in Brickner Family Auto Group Victory Lane afterwards. “We’ve been out here testing, it’s hard to compete with these guys now. We’re just a low-dollar deal, out here testing and working out tails off and trying to get this thing better every week. We threw something at it in the feature and that’s probably the best car we’ve had in a long time.”

Mackesy finished a strong second, his best super late model finish at the track. He led six laps in the early going, taking the lead after Nathan Steif led the first five laps. The third-generation Athens driver also fought back twice after slipping back to third, getting inside the strong cars of Mondeik and Fenhaus to retake the runner-up spot.

Travis Volm finished third with Brock Heinrich fourth and Mondeik fifth. Fenhaus wound up sixth, slipping back after getting caught on the outside in the closing laps.