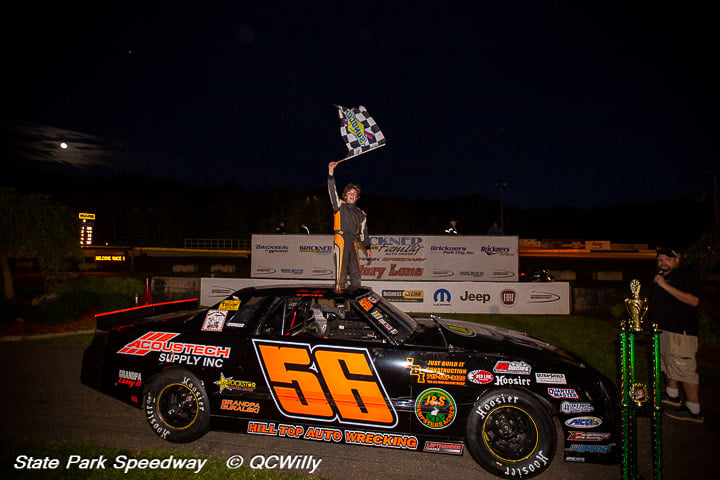 Kolton Guralski had experience winning at State Park Speedway, but not with his current car, while Noah Gajewski had never won a feature at the track before. Both were victorious in feature racing though as Guralski won the 25-lap Advance Auto Parts Pure Stocks main and Gajewski was best in the Snap-on Mini Mods feature.

Guralski powered past Kole Ferge on a lap 18 restart to take the lead and held off Mitch Stankowski on another restart a lap later, pulling away in the final laps. A former Bandolero class champion and multi-time feature winner, he won a pure stock feature for the first time at State Park.

“That was one thing we focused on this offseason, was getting this car fast here,” said Guralski. “It’s been good everywhere else, just not on my local track, so we worked on that this year and got it in victory lane on the second night.”

Guralski came out on top of a race that had an early side-by-side battle between front row starters Ferge and Brian Plisch and was clean until contact resulted in two late cautions.

Plisch and Ferge were almost even the first eight laps until Ferge surged ahead on the outside and took the lead on lap 9. Guralski moved into second four laps later but still had some work to do to catch Ferge until a caution on lap 18 when fast qualifier Alex Volm stalled in the first turn with a flat tire.

The yellow waved again one lap later when Plisch’s car had a tire go down after rubbing against Ferge’s No. 32 car in between turns 3 and 4. Plisch eventually spun out in turns 1 and 2, and Volm had nowhere to go and received right front fender damage.

Volm was still not finished, and after a restart with seven laps to go he drove back up to third and was working on Jeff Spatz for second on the final lap when a tap caused Spatz to spin. The checkered flag flew and Volm came across second, but he tapped out taking responsibility for the contact, allowing Spatz to keep his spot and finish second while Volm was sent to the back and finished eighth.

Gajewski made a strong move early and once in front sailed away to win the 20-lap mini mods feature. He passed Kevin Tessmer on the high side on the sixth lap and led the rest of the way for his second career mini mods feature win and first at State Park. He was not seriously challenged and finished 12 car lengths ahead of second-place Gary Garand of Weston.

“When this thing sticks (on the outside), it sticks,” said Gajewski after the race. “I just drove and couldn’t look back in my mirror, I was gone.”

Wausau’s Tom Lecher had the field covered in the Rockstar Energy Drink Mini Stocks, taking the lead on the seventh lap and withstanding two late race restarts to finish at the front in the 25-lap feature. Lecher’s car was disqualified after the race, though, giving Ashley Schoone of Gleason her first feature win of the season.

Schoone led the first six laps before a pileup in the third turn when Jason Hopinka made contact with a lapped car, and both cars went up the track leaving a number of cars nowhere to go. Evan Pingel and last week’s feature winner Chad Ferge both had heavy damage and were done for the night, and in all seven cars were collected in the incident.

Lecher took the lead after the restart, but Schoone ran in the top three the entire race and twice moved past Amanda Rowe to retake second place after late restarts. Rowe wound up finishing second, while Steve Clark posted a career-best third-place finish.

Racing continues next Thursday with super late models, pure stocks, mini mods and mini stocks all on the schedule. Fred Mueller Qualifying will begin at 6 p.m. and racing will follow at 7 p.m.