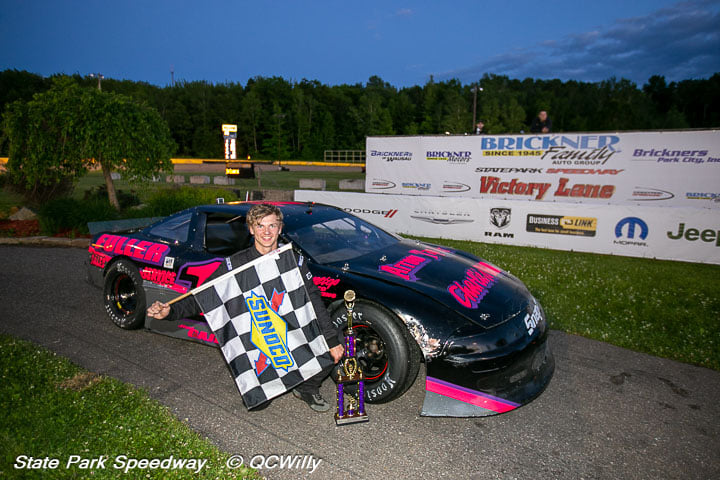 WAUSAU, Wis. (June 11) – First driving a damaged car, then making it work on the high side of the track, Noah Gajewski bucked the odds and became a back-to-back winner at State Park Speedway.

The 15-year old from Marathon ran side-by-side with Lietz for 12 straight laps. Gajewski held a slim lead at the line for all but one of those laps, but could not shake the strong inside runs of Lietz going into the corners until finally clearing him with two laps left in the race.

Gajewski finally cleared Lietz on lap 19, and Blount followed quickly behind into second. Blount set a new mini mods track record and had been waiting behind Gajewski and Lietz for a number of laps, but he ran out of time and finished 1 1/2 car lengths back at the finish.

Gajewski also won after suffering damage on lap 7, when he backed into the Turn 2 water barrels and tires after contract with Gary Garand. Gajewski was able to drive away and moved back into his second-place position after Garand tapped out taking responsibility for the incident, but he found out after that he raced the rest of the way with a bent rear spindle.

Another super competitive race in the Advance Auto Parts Pure Stocks had a thrilling finish, then disappointment but eventually vindication for Kolton Guralski. The Wausau teen crossed the line first for his second straight feature win in the class, but was disqualified upon postrace tech inspection, giving the victory to Mitch Stankowski. That decision was reversed Friday morning, though, meaning Guralski’s second straight win in the class stands.

Guralski was the winner in a 25-lap feature that saw six lead changes among four cars. Seven cars in the eight-car field ran in the top two at one point, and the race also had five caution flags, three involving cars running first and second at the time.

Stankowski’s race also was a roller coaster, as he first took the lead on the third lap and led until spinning after contact with Jeff Spatz on lap 12. He would be back in first just a lap later, though, inheriting the lead after leader Alex Volm spun after contact from Brian Plisch, but Guralski passed Stankowski on the outside on a lap 13 restart.

The last caution came on lap 24 after a spin by two-time defending class champion Brian Schramm while challenging Guralski for the lead. Schramm had hounded Guralski for four laps before diving to the inside entering the third turn, but he spun after contact with Guralski’s door and ended up finishing fourth.

Wausau’s Garret Strachota spent last season racing in the mini mods class, where he won three features and was a strong contender for the season championship before finishing third. This year, Strachota is back racing with the Rockstar Energy Drink Mini Stocks, and he claimed Thursday’s 20-lap feature for his first feature win of the season.

The mini stocks also had a semi-feature for the second time this season and Ashley Schoone became a double-winner on the night, following up a heat win with victory in the 10-lap semi. Last week’s feature winner, Schoone passed Makayla Last on lap 4 and went on to win with Last finishing second and both transferring to the feature.

Next Thursday is the Flip Merwin Memorial, with super late models, pure stocks, mini mods and mini stocks all on the schedule, plus the Bandoleros make their first visit to the track this season. Fred Mueller Qualifying will begin at 6 p.m. and racing will follow at 7 p.m.