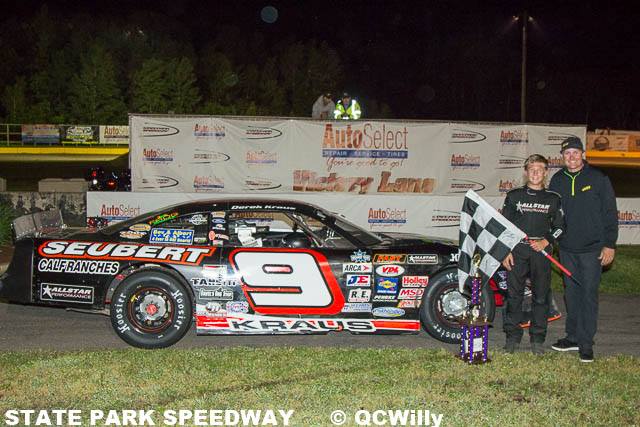 NASCAR Gander RV and Outdoors Truck Series driver Derek Kraus makes his return to State Park Speedway this Thursday for the Flip Merwin Memorial.  The race, in memory of snowmobile racer Flip Merwin, who was killed at the World Championships in 2003, is coined one of the biggest races of the season at the Wausau, Wisconsin racetrack.

“Over the years I’ve been fortunate to learn a few things about Flip, all he accomplished and what a standup person he was,” Kraus told Speed51.  “It’s a very special race at SPS and I look forward to running it this Thursday night.”

The Stratford, WI native knows what it takes to win the prestigious event, he took the checkered flag in 2016.  His Flip Merwin Memorial win four years ago was one of four Kraus picked up at State Park Speedway during his short track career.

“It’s always a challenge to come home and race against the people that race in a Super Late Model every week,” said Kraus.  “But I really like State Park.  There, you just need to be patient throughout the whole race. I need to make sure that I’m there at the end to win the race.”

Another Flip Merwin Memorial win would not just be special for the 18-year-old driver, but his entire family.  Growing up in Central Wisconsin and building his career racing throughout the state, there is still nothing quite like winning at home.

Kraus actually followed in the footsteps of his father, Mark Kraus, who has raced in everything from the ARTGO Series to the ARCA Midwest Tour.  With the precautions taken by NASCAR regarding COVID-19, Mark Kraus missed his son’s race for the first time ever last month.  Both father and son are excited to be reunited around a racecar this week.

“I look forward to working with my dad on the racecars and at the track,” said Kraus.  “The Charlotte race was the very first race that he has missed of mine ever and Thursday will be the first race bac together, so that will be special because SPS is where we started together.”

“My dad has taught me a lot of patience and taught me how to take care of the racecar throughout the race.”

The Flip Merwin Memorial takes place this Thursday night at State Park Speedway.  Qualifying begins at 6:00pm CT with racing starting at 7:00pm CT.  Kraus will be available for autographs from 6:45pm – 7:15 CT.