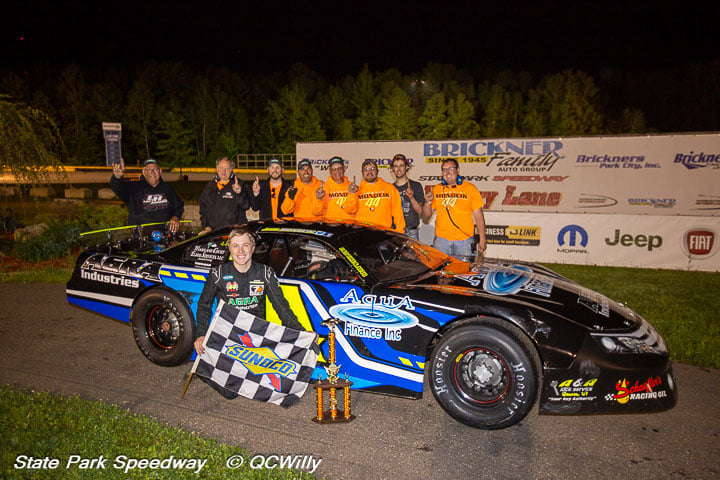 WAUSAU, Wis. (May 28) – After just missing out on State Park Speedway track championships each of the last two years by slim margins, Justin Mondeik is back for another shot in 2020.

Opening night showed that Mondeik should be right in the thick of the points again this year. The Gleason driver won the initial Auto Select Super Late Models feature of the season, claiming the 60-lap main event on a hotly contested first night of racing this year at the quarter-mile oval.

Mondeik drove through the field from his 10th starting spot in a field of 12 super lates. He passed Mark Mackesy on the 45th circuit to take the lead and withstood a late restart to hold off Gabe Sommers of Plover for the win.

Mondeik won his second straight feature dating back to last season, as he also won the 2019 season finale. It was a second straight near-miss for the title, though, as he finished six points behind champion Jay Van Der Geest, that coming after finishing four points behind Luke Fenhaus for the super late model championship in 2018.

For most of Thursday’s race it appeared Mackesy would be tough to catch, as the Wausau veteran took the lead on the first lap from the outside front row and led the first 44 laps. He withstood an early challenge from Jeremy Lepak and paced a group of eight cars running single file closely behind.

Mondeik slowly moved up, passing Brock Heinrich for third on lap 33 and then going outside Lepak for second five laps later. It took just five more laps before he was to Mackesy’s bumper, and he moved outside the leader on lap 44, led at the line on lap 45 and was clear in first soon after.

Mondeik was pulling away when caution came out with nine laps left after third-place running Luke Fenhaus stalled in the fourth turn with a flat tire. That set up a restart with Sommers moving to the outside of the front row with a chance to challenge for the lead, but Mondeik cleared him quickly.

Sommers got back to Mondeik’s bumper twice in the final six laps, but the 2019 Larry Detjens Memorial winner at SPS got no closer and finished 1 1/2 car lengths back. Mackesy finished third, with M.G. Gajewski of Wausau fourth and Lepak fifth.