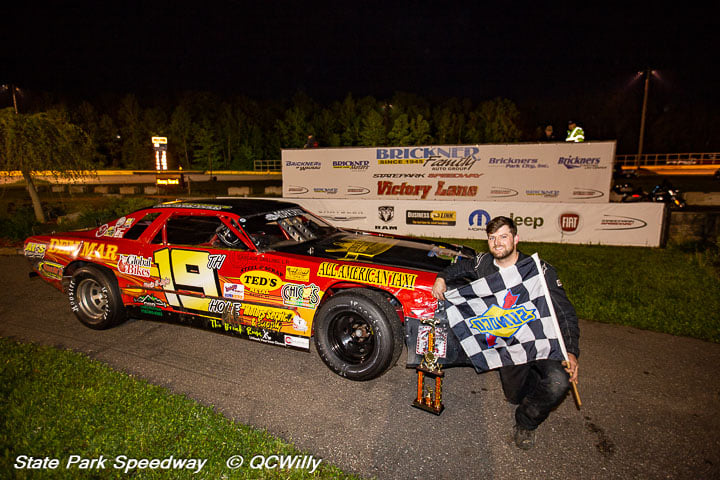 WAUSAU, Wis. (May 28) – Kyle Genett did not plan to race at State Park Speedway this year, until making a last-minute decision just before the 2020 season opener to add on to his already busy racing schedule.

It proved to be a wise choice. Racing at State Park for the first time since 2017, Genett won the 25-lap Advance Auto Parts Pure Stocks feature in Thursday night’s season opener at the Wausau quarter-mile.

Genett wheeled to victory the Travis Weisenbeck-owned 19th Hole car, which was raced regularly by Mitch Stankowski up until last year. A former regular at SPS who has focused on dirt track racing in recent years, Genett passed Wausau’s Jeff Spatz on the fifth lap and led the rest of the way for his first feature win at the track since the 2017 opener.

Genett got to the point after an early shuffle at the front, one that saw Kole Ferge take the lead on the first lap before Spatz went ahead on lap 2. Spatz proved tough to pass for a couple laps until Genett drove inside of him out of the fourth turn on lap 5.

Once ahead, Genett held a 10-car length lead the rest of the way to best a competitive field. He finished ahead of defending champion Brian Schramm of Wausau. Fast timer Alex Volm of Mosinee placed third, while Kolton Guralski and Dave Cabelka of Wausau were fourth and fifth, respectively.

Wausau’s George Seliger and Greg Blount of Marathon staged a points battle in the Snap-on Mini Mods that went right down to the final lap of the season a year ago, one that ended with Blount winning his first title in the mini mods and snapping Seliger’s run of three straight championships in the class. The two were at the front again Thursday night, but Seliger held off Blount to win the 20-lap feature.

Seliger cleared Weston’s Gary Garand for the lead on lap 11 to end an eight-lap side-by-side battle between the two. He had no time to rest, though, as Blount followed right behind to move into second.

The defending champion looked high and low, even catching some grass off the apron in turn four, but Seliger held on to win by 1 1/2 car lengths. Garand finished third with Noah Gajewski of Marathon fourth.

Like Seliger and super late model winner Justin Mondeik, Chad Ferge of Weston also finished second in the points in his class a year ago, and he got the 2020 season off on the right foot by winning the Rockstar Energy Drink Mini Stocks feature.

Ferge worked his through the field from the ninth starting spot and took the top spot on lap 13 of the 20-lap main, going by on the inside after early leader Jason Hopinka of Kronenwetter drifted high in turns three and four. Ferge would go on to finish ahead of Shawn Kemnetz of Hancock by five car lengths. Wausau’s Garret Strachota finished third, Steve Clark of Kronenwetter posted his best career feature finish coming in fourth and Hopinka rounded out the top five.

Wausau’s Kendra Baumann also was a double winner in the class, claiming the first heat and then winning the 10-lap semi-feature. She led start-to-finish and came across ahead of Daniel Lashua in the semi. Makayla Last edged fellow rookie Jeremy Whitman at the line for third after some of the best side-by-side racing of the night over the final four laps.

Complete RacePassResults
More: Mondeik picks up where he left off with super late model win in opener