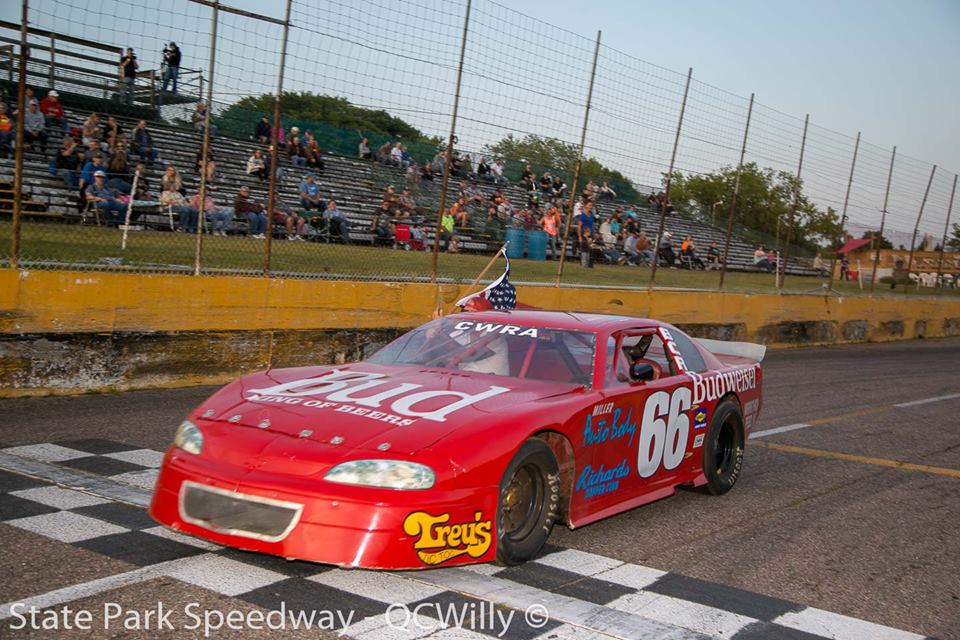 Longtime Wausau racer Wayne Lodholz will be remembered once again, and several very close points races also will take center stage on the second-to-last night of regular racing at the State Park Speedway this Thursday.

The 11th annual Wayne ‘Lodi’ Lodholz Memorial will be highlighted by a 75-lap feature for the Auto Select Super Late Models presented by C-Tech. The Advance Auto Parts Pure Stocks, Snap-on Mini Mods and Rockstar Energy Drink Mini Stocks will also be on hand, and it will also be season championship night for the E.H. Wolf & Sons Bandoleros.

Lodholz was a longtime racer at State Park Speedway and also at tracks such as Golden Sands Speedway and Tomahawk Speedway, racing first in hobby stocks and later in late models with his familiar No. 66. A Wausau native, he won the 1989 Larry Detjens Memorial title and a total of 19 late model features at the track and finished as high as second in the late model points in 1989.

In his later years, Lodholz was best known for driving a red car sponsored by Budweiser, and that car has been restored and continues to be shown at the track during the memorial race every year.

Lodholz passed away in 2007 at the still-young age of 55, and the memorial race was established in his name in 2009. Since then, it has joined events in the memory of Larry Detjens and Flip Merwin to become among the biggest on the calendar at State Park Speedway.

Luke Fenhaus of Wausau is the defending winner of the Lodi Memorial, the defending track champion in the super late models and also is coming off his first feature win of the season last week. Fenhaus also is still in the hunt for this year’s super lates title, entering Thursday third in the points.

The spotlight in the class, though, especially is falling on Merrill’s Jay Van Der Geest and Justin Mondeik of Gleason. Van Der Geest leads Mondeik by eight points (360 to 352), with both in hot pursuit of their first-ever SPS super late model championship. Fenhaus is 34 points behind Van Der Geest, lurking if the top two face struggles in the final two weeks.

The other especially hot points race is in the Snap-on Mini Mods, where Marathon’s Greg Blount holds a six-point lead (767 to 761) over Wausau’s George Seliger with two weeks left.

Blount has won the last two features to move to the top, and he is searching for his first-ever mini mods championship and his first track title since winning the mini stocks championship in 2016. Seliger is looking for his fourth consecutive championship in the division, trying to become just the third driver in track history to win four straight titles in the same division. Only Wayne Breitenfeldt (seven straight championships in super late models from 1994-2000) and Lyle Nowak (five straight in the legends class from 1996-2000) have accomplished the feat before, and Seliger’s current three straight championships has him tied with the likes of Dick Trickle (1970-72 and 1981-83 in late models) and Travis Volm (2011-13 in pure stocks) as three-time champs.

Among other divisions, Wausau’s Brian Schramm holds a 33-point lead over Alex Volm of Mosinee in his quest for a second straight championship in the Advance Auto Parts Pure Stocks. Kole Ferge of Schofield also is looking for his second straight Rockstar Energy Mini Stocks title and leads cousin Chad Ferge of Wausau by 55 points. Portage’s Alex Hartwig also holds a 36-point lead over defending champion Jevin Guralski of Wausau in the E.H. Wolf & Sons Bandoleros, who will crown their champion Thursday with their final race of the season.

Racing begins Thursday night with Fred Mueller Qualifying at 6 p.m. and racing at 7 p.m. Pit gates open at 3 p.m. and fan gates open at 4:30 p.m. Admission is $15 for adults, $8 for youth age 6-12, with ages 5 and under free. Along with racing, the night also will include David Sargent playing live music in the Speedway Bar after the races.