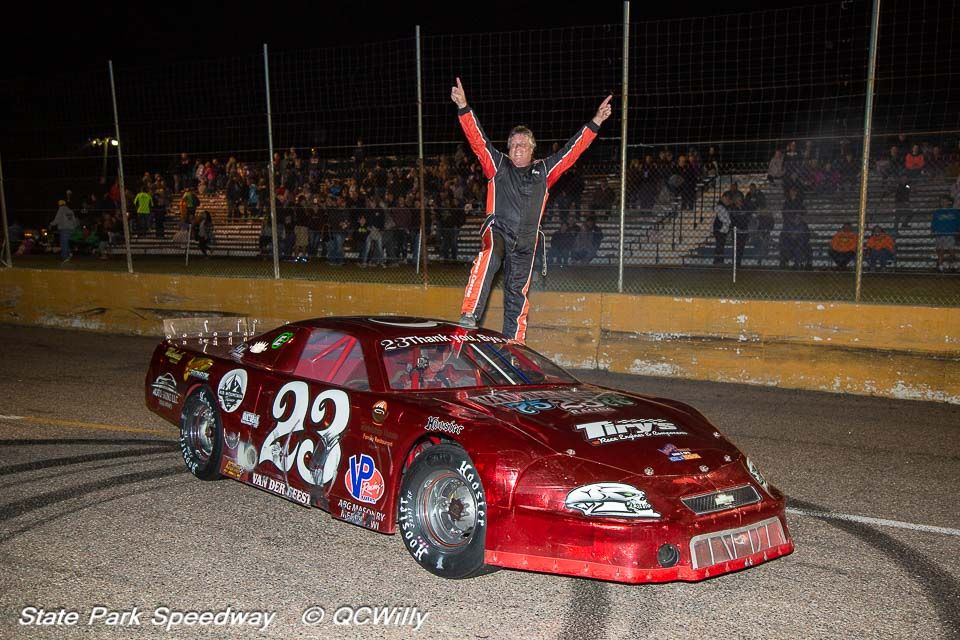 Mondeik rebounded from a miserable night a week earlier to win the Auto Select Super Late Models presented by C-Tech feature, taking the 50-lap main event on Fighting Cancer Full Throttle Night. For the second straight year, though, the Gleason native finished a few points shy of a championship, as Van Der Geest edged him out by six points for the season title.

Van Der Geest won his first-ever super late model crown in 24 years of racing. The popular Merrill driver finished fifth in the feature, and at 54 years old he became the oldest super late model champion in track history, one year after then 14-year old Luke Fenhaus was the youngest-ever season champ in the class.

Van Der Geest ended up going wire-to-wire leading the super late models this season, winning the feature on the first night and never surrendering the lead. He did so just one year after running twice late in the season at State Park Speedway and in a year where he originally had no plans of running for points at the track.

“The first race we came out there, I told everybody I want to semi-retire, put (son) Levon in the car a little bit, and the fans they started teasing me saying ‘You’ve got to come back,’” said Van Der Geest after the feature referring to his opening night win. “And every week the same fans kept saying to me ‘You’ve got to come back.’”

The final night did not come easily for the champion, as Van Der Geest struggled in qualifying, timing in sixth of nine cars. “All season long, we’ve barely touched the car,” said Van Der Geest, “and tonight when we rolled off it just wouldn’t go.”

A win in the first heat helped him pick up some important points, though, and though he slipped back from his pole starting spot early in the feature, he steadied to stay in the top five. Van Der Geest still had no room to slip up in the final 10 laps, though, with Brock Heinrich and Mike Olson both lurking close behind.

Mondeik entered the night in third in the standings, 28 points behind Van Der Geest, but gave it a valiant run one week after he totaled his main car in a practice laps crash and then saw a good feature run with a backup car fall apart in the final laps. He set fast time, finished second in his heat and then led the final 21 laps of the feature, getting by Ryan Hinner shortly after a mid-race restart.

It was actually another brief dark cloud that sprung Mondeik finally getting a good break. Running second and closing in on Hinner on lap 27, Mondeik spun after contact from Fenhaus in turn two, bringing out the yellow and sending both to the back of the pack.

With many drivers picking the inside lane on the restart, though, Mondeik actually restarted on the outside of the second row. He passed both Van Der Geest and Travis Volm on the outside on lap 28, and a lap later worked outside Hinner for the lead. Mondeik checked out from there, building nearly a straightaway lead and coasting from there for his second feature win of the season.

Mondeik finished second in the points for the second straight year. A year earlier he finished four points behind Fenhaus for the title after Fenhaus took the lead in the final feature with three laps left and Mondeik finished inches behind Neil Knoblock for second, a five-point difference of position that decided the championship.

“It’s definitely a little disappointing, we really feel that championship could’ve been ours (if not for last week),” said Mondeik after the race. “The car was just awesome tonight.”

Volm passed Fenhaus with seven laps left to finish second. Fenhaus came into the night 22 points behind Van Der Geest but was unable to replicate the dominance of his feature wins the previous two weeks and finished third. Hinner came home fourth after leading the first 28 laps from the pole, when he built a big lead early before the pack slowly closed in.