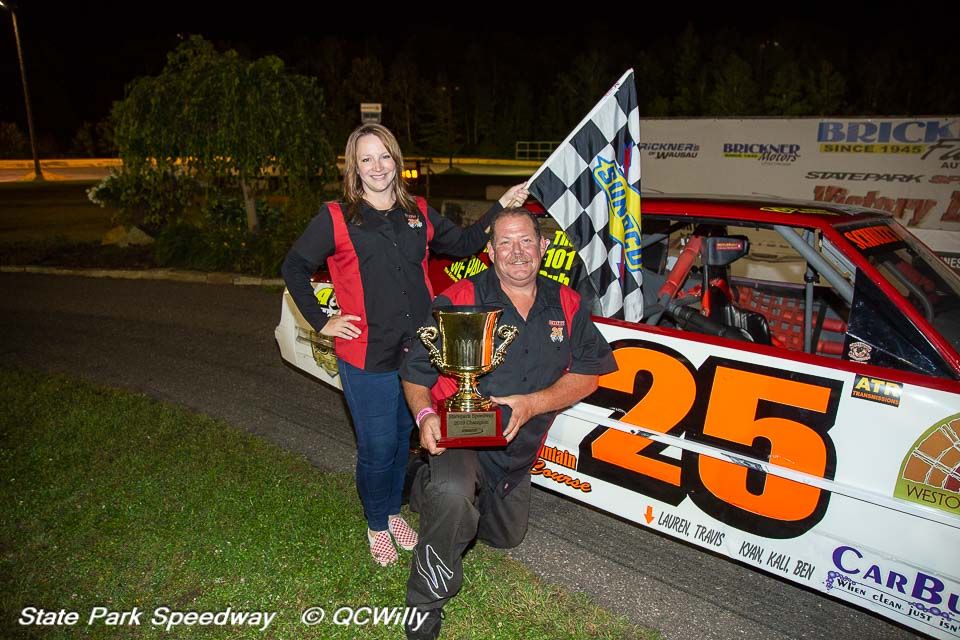 Much like the night for super late model champion Jay Van Der Geest, it was far from a stress-free evening for points leaders Brian (Butchie) Schramm and Greg Blount Thursday on season championship night at State Park Speedway.

Schramm came up just short in a superb side-by-side battle with Alex Volm over the last 11 laps of the 25-lap pure stock main, with Volm holding on by half a car length after the top two were even coming to the white flag. The Wausau driver still had just enough cushion in the point standings, though, to finish eight points ahead of Volm in the finally tally for the season.

It took much of the race for Schramm to get close enough to Volm to get that margin, as he was stuck at the tail of a seven-car pack for the first 10 laps while Volm surged to the lead on lap 8 by passing Brian Plisch on the outside.

Schramm worked inside Jeff Spatz for fourth on lap 14, and the race took a big turn two laps later when a caution came out after second-place running Mitch Stankowski was clipped by a lapped car. Schramm then moved up from third to the front row outside Volm on the restart after Plisch chose the inside lane, and the top two staged an 11-lap drag race the rest of the way.

Schramm won back-to-back titles for the second time in his SPS racing career, having also won in 1999 and 2000 in the street stock division. Volm won his fourth feature of the season, closing out his best-ever finish in the pure stocks.

“Even though we fell short on the points, to win on the last night, to win on the last night it feels just as good to me,” said Volm afterwards. “It’s the best year I’ve had in 10 years of racing…we had a loose car there, and I know Butchie loves that inside, so I said I wasn’t going to make the same mistake I made before and open it up…man, that was awesome.”

Blount rallied late to finish third in the feature behind winner Gary Garand and second-place George Seliger. The resident of Marathon wrapped up the season nine points ahead of Seliger, who was bidding for his fourth straight championship in the class.

It looked bleak for Blount for a moment past the halfway point of the 25-lap feature. Racing for the lead on lap 15, he got into Garand on the backstretch, causing a spin which Blount took the blame for. As a result, Garand got his lead spot back with but Blount had to go to the rear of the field.

The race restarted with 11 to go, and it took some time for Blount to work his way back through the pack. He moved into fourth with four laps left, though, the same time when Seliger slipped back to second after a side-by-side battle for the lead with Garand, and Blount also got by Dale Louze on the outside on the final lap to finish third and ensure his first points championship since taking the 2016 mini stocks title.

Garand won his second career mini mod feature and second of the season, taking the lead on the first lap and proving tough to pass on the outside. The Weston driver and native of the state of Maine was challenged multiple times on the outside by Seliger, who even held a slim lead at the line on laps 16-18. In all, the two raced 12 very clean laps side-by-side with both giving the other plenty of room, but Garand’s zippy Mustang held strong as he capped his best season at SPS so far.

“Yeah, it was very nice of Greg to tap out with a little touch there,” said Garand after the race, “he was certainly faster and a little better handling, but it was nice to race with George clean and get the victory, I appreciate that.

Kole Ferge of Schofield came into Thursday night needing to just start the feature to wrap up the Rockstar Energy Drink Mini Stocks championship, but he did much more than that as he finished the season with another feature win.

Ferge closed out his second straight mini stocks championship with his third straight feature win and sixth feature victory of the season. He passed Evan Pingel for the lead on lap 13 and cruised the rest of the way to win the 20-lap race. Pingel finished second after leading for the first 13 laps from the inside pole, holding off Tom Lecher for the runner-up spot.

“Yeah it feels really good to go back-to-back, and I hope to do the same tomorrow,” said Ferge of his pursuit of a second straight title at Golden Sands Speedway as well. “It helps to throw on new tires on under it, but this car really comes around when we’ve got a 20-lap feature.”