Fenhaus breaks out for first SPS feature win of season 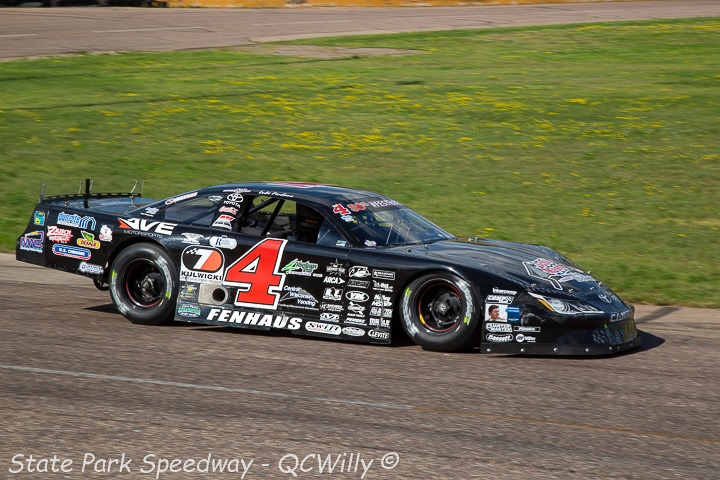 WAUSAU, Wis. (Aug. 15) – Quiet for much of the season at State Park Speedway coming off a championship a year ago, Luke Fenhaus broke out in a big way Thursday night.

The 15-year old from Wausau and defending champion in the Auto Select Super Late Models class scored his first feature win of the season, winning the 50-lap main event as part of the Wib Baumann Memorial and Corn Night at the speedway. He became the sixth different winner in six super late model features at the track this season as the class made its return to regular points racing after a nearly six week absence.

Fenhaus had a dominant car Thursday night, which he displayed with a powerful run to the front. Going to the outside groove with the top four cars running single file, he moved from fifth to first in a span of just six laps, taking the lead from Travis Volm on lap 19.

Fenhaus was challenged by early leader Volm for 3 1/2 laps after a lap 18 restart. He led the final 33 laps, though, with only one brief scare on a restart with 25 to go. Justin Mondeik started alongside Fenhaus, but he quickly tucked in just behind the leader and stayed in second the rest of the way.

Fenhaus finished the race eight car lengths ahead of Mondeik, and after the race the Kulwicki Driver Development Program participant did a backwards victory lap in honor of Kulwicki before pulling into Brickner Family Auto Group Victory Lane. He also credited his team’s work on his second car with helping it uncover some speed Thursday.

“We found something with the Fury that we thought would make it better, and it definitely did,” said Fenhaus of the car he has used in a number of specials across the state. “We could roll the center so much better than anybody else and pick up the throttle better than anybody else…(Crew chief) Tommy (Ress) and all the guys did a great job on the car this week.”

Mondeik finished second, bouncing back after going to the back early after tapping out and taking blame for contact causing Jay Van Der Geest to spin on lap 18. Volm finished third coming off a win in the last SPS super late model points race July 3rd, while Van Der Geest also came back for fourth after a second spin on lap 25.

Fenhaus was fast from the start Thursday night, setting fast time in Fred Mueller Qualifying for his first fast time effort of the year. He also rallied late to finish second to Van Der Geest in the second heat after hanging back much of the race. Volm added a win in the first heat.