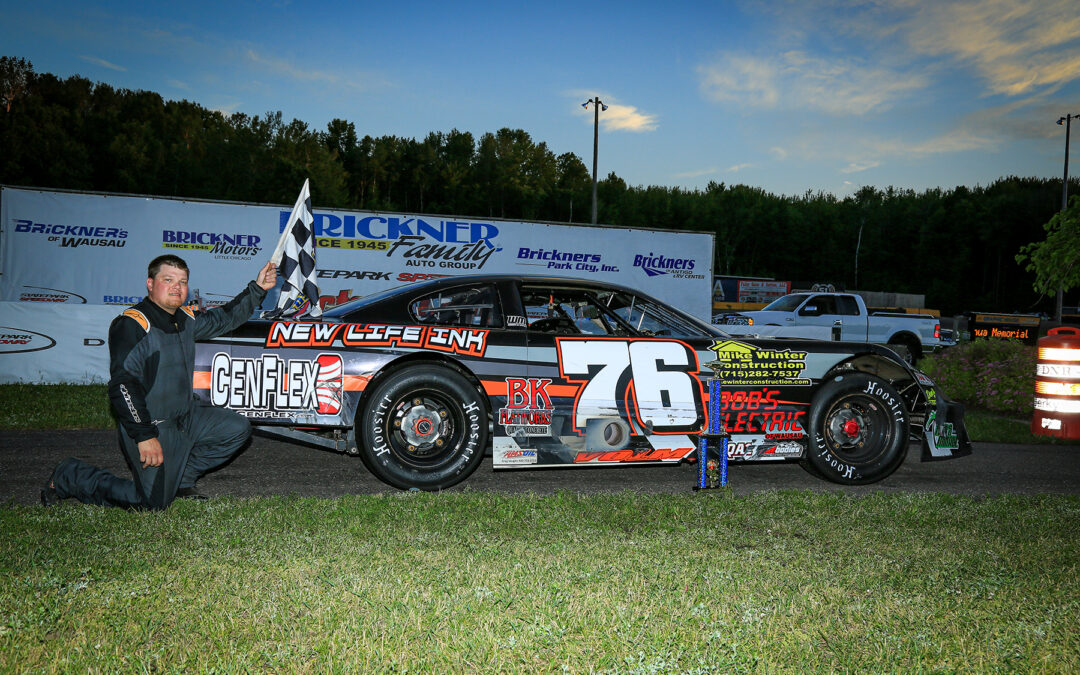 The first 30 lap main found Mike Reichenberger, Appleton, WI., and Weinfurter making up the front row. Before a lap was even in the books, Weinfurter jumped out to the lead. Weinfurter immediately built up a five car advantage while the 19 car field sorted itself out. Dillon Mackesy, Wausau, WI., moved into second spot with just a handful of laps completed and set out for leader Weinfurter. Mackesy closed the gap slightly, but the sly veteran Weinfurter only pushed his car as much as he had to on the tight 1/4 mile paved oval. In the meantime, Nick Roehl, Fon Du Lac, WI., was the man on the move, taking the 3rd position from his 9th starting spot with 10 laps down. Weinfurter maintained his 4 car length cushion, but it was now Roehl and Chad Butz, Green Bay, WI., battling for the 3rd position. The two were side by side for numerous laps and while battling were catching up to Mackesy. With just 3 laps to go they were on Mackesy’s bumper with Roehl sneaking to the outside. The move paid off as Roehl was able to secure the position on the last lap. Weinfurter led every lap, maintaining his cushion to the checkered flag. The finishing order, in the caution free race, found Weinfurter 1st, followed by Roehl, Mackesy, Butz, Bentley Trucking fast qualifier, Travis Volm, and Mark Mackesy your top 6 finishers.

The second 30 lap Feature found top Tour Rookie, Harley Jankowski, Sparta, WI., and Greg Back, Ringle, WI., on the front row. Neither driver would give an inch as they raced side by side for the first 5 laps. Mitch Stankowski, Wausau, WI., moved up to challenge the leading duo, and after waiting out a Weinfurter, D. Mackesy twin spin, moved into 2nd. Unfortunately for both Back and Stankowski, the two made contact, spinning in corner one. Both were sent to the back of the pack on the restart, ending any chance they had for winning the race. On the restart, it was Paul Paine, Mound, MN., grabbing the lead and stretching his margin to 6 car lengths at the half-way point of the race. The car to watch at this point, was Travis Volm, as he was all the way up to 3rd from 10th starting spot with 13 laps remaining. Volm suddenly found extra power, passing both Jankowski and Paine within two laps. With the pass, Volm was long gone, pacing the 19 car field the rest of the way, winning his first ever CWRA Feature by 3 car lengths. Next in line at the Checkered flag was Paine, Mark Mackesy, Nick Roehl, Chad Butz, and Jankowski.

With this event concluding, The CWRA Stars to Legends Tour will look forward to their next racing action, once again at State Park Speedway. Thursday, July 18th, is the date, as it will be book signing night with Racing Father Grubba. A number of special guests and dignitaries will be on hand on the special night of racing.

$50 Product certificate “Brake of the Race”  Feature one    Nick Roehl