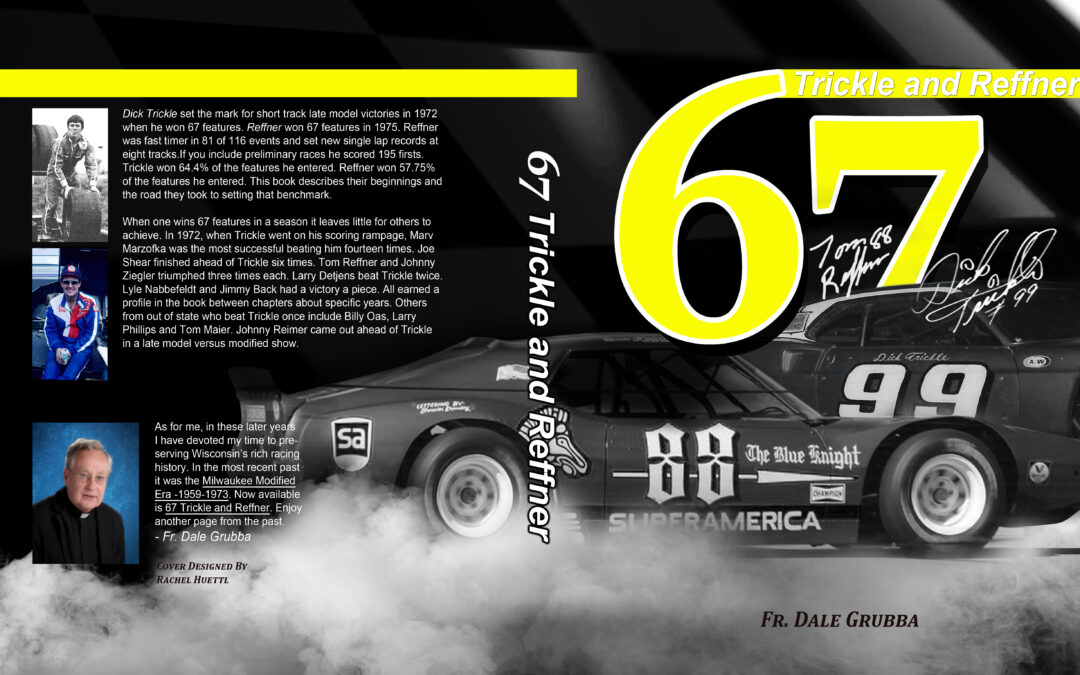 Thursday, July 18th will be a special night at State Park Speedway as we host  Fr. Dale Grubba’s final book on Dick Trickle and Tom Reffner. Drivers old and new will be on hand as well as some memorable cars to celebrate Fr. Grubba’s newest book 67.

“Fr. Grubba has been a dear friend of our family for a long, long time,” said State Park Speedway owner Ron Wimmer.  “He’s at the track almost every week giving his opening prayer and he has been involved in racing for so long and is such a part of its history. We are excited to have him here next week and especially excited to be part of his book 67 and welcome back all the special guests that are taking part in this celebration.”

The list of former and current driver attending Thursday night’s event is quite extensive.

Not only will many drivers be on hand, but some memorable cars will be there as well including the 1957 Moose Peterson Chevrolet that was driven by Marzofka, Larry Detjens No. 25, the Mustang Dick Trickle drove in 1975, the ‘thunder pony’ driven by Rich Sommers and more.

Cars will be on display and some might even make in on the track for opening ceremonies.  There will be a Special Guest driver autograph session from 5pm-6pm.

Of course, Fr. Grubba will be there with copies of his book, 67, which honors Trickle and Reffner, who both won 67 features in a single season.

“It’s going to be a very special night,” said Wimmer.  “Any time you can get so many past and present drivers together it is an awesome thing for them and for the fans.  Stories will be told and it gives the fans a chance to catch-up and share their memories of so many great racers.  The number of people coming to support such a special night for Fr. Grubba just tells you the kind of impact he has had across the sport for years.”

Also expected to be there is Paul Stender with his Jet Powered Port-A-Potty. He is a special friend of Father Grubba and wanted to be part of his celebration.

On track, the CWRA Stars to Legends Tour highlights the night along with the State Park Speedway support divisions.  This marks the second of three CWRA events at the Wausau, WI track this year.  Fan gates open at 4:30pm, with the autograph signing at 5:00pm, Fred Mueller qualifying at 6:00pm and racing at 7:00pm.  Ticket prices are $12 for adults (13 and up), $5 for kids (6-12) and five and under are free.

All the Sauters including Johnny

John Gilbertson: 1) The replica of the AMC Javelin that Tom Reffner won the 67 features in in 1975.

Jay Capek: 1) The Camaro that Marv Marzofka won four track championships in one summer with.