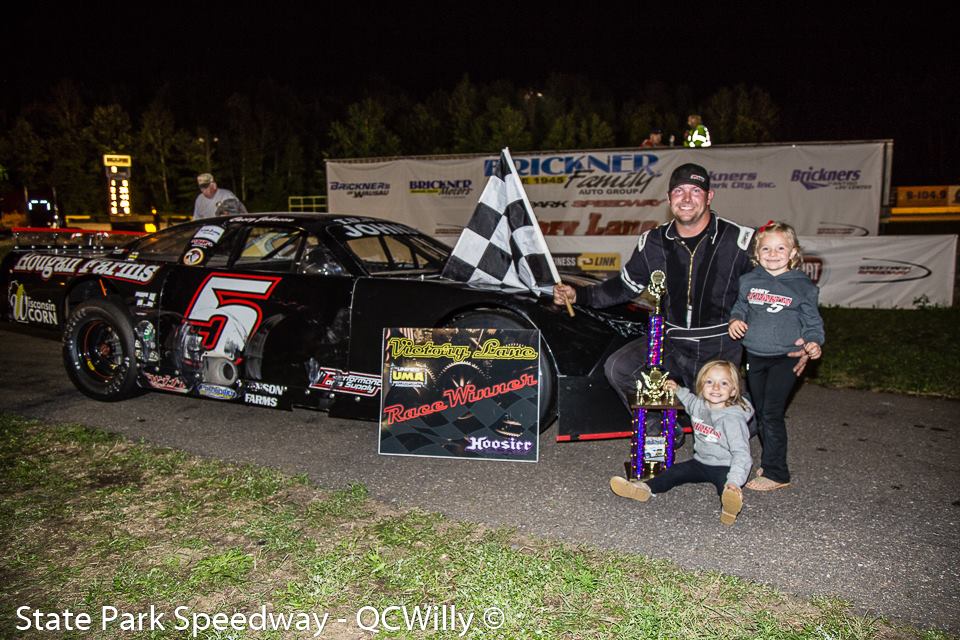 Wausau, WI- Having won last year’s Larry Detjens Memorial at State Park Speedway as well as half of the ARCA Midwest Tour Super Late Model events this season, Casey Johnson is amongst the favorites for the Auto Select Larry Detjens 125 this Saturday night July 27.  Johnson finds himself twelve markers ahead of Milwaukee winner Austin Nason as the ‘Stars and Cars’ of the Midwest Tour will take on the best Central Wisconsin racers in the 38thannual event named after the popular short track star.

Johnson, the 2018 Fox River Racing Club Champion at Wisconsin International Raceway was victorious during the last tour event, the All-Star 100 at Rockford as well as over the Memorial Day Weekend in the Salute the Troops 100 at Jefferson Speedway where he is a three-time track Champion.  Last season, the Edgerton, WI native collected the Larry Detjens hardware at SPS.  Austin Nason topped a star studded field on Father’s Day at the Milwaukee Mile, taking the lead with six miles remaining to capture the biggest win of his career and third career Tour victory.  Nason was the 2018 point runner-up in Midwest Tour competition and currently sits second in the point standings.  2011 Tour Champion Andrew Morrissey will return to State Park Saturday night, he is the most recent Midwest Tour winner at SPS after a dominating performance in the Cabin Fever 100 in May of 2018.  Morrissey, who also collected the Oktoberfest 200 hardware at LaCrosse last season, has been ultra fast at the Wausau oval and is the 2009 Detjens winner.

Saying he hopes his car is as good as it was in the Flip, MG Gajewski is looking for his first Detjens checkered flag.  Gajewski has captured three Flip Merwin wins in a row including a strong showing in 2019 in which he was also the fast qualifier.  With three wins on the season at SPS, Travis Volm has entered his #76 Chevrolet into Saturday night’s main event.  Two touring stars have also picked up wins at SPS this season.  Justin Mondiek, the 2018 SPS runner-up who recorded two wins last season at his home track completed a clean-sweep last month.  Also visiting SPS victory lane in June was John Beale, who picked up his first SPS win in the Wisconsin Challenge Series season opener.  Beale has three Super Late Model wins on the season.

John DeAngelis’ season is on the upswing, having led the most laps at the season opening Joe Shear Classic at Madison, he currently sits third in the Tour point standings.  He has won many of the Midwest’s largest events, Rich Bickle would like to add the Larry Detjens Memorial to that list.  Bickle, a former full-time driver in the NASCAR Big Three, is fifth in Tour points and counts the National Short Track Championships, Snowball Derby, Dixieland 250 and Slinger Nationals amongst his accomplishments.  2018 Wisconsin Challenge Series Champion Ryan Farrell is seventh in the series standings while Dells Raceway Park Winner Gabe Sommers sits ninth, 25 points out of the Rookie lead.

A pair of three-time Detjens winners will also be in action. Mark Mackesy, the 1999, 2006 and 2012 Detjens winner is always a threat when you talk about racing at State Park Speedway.  Mackesy wowed the Touring Stars during the Tour’s first visit to SPS, as the Central Wisconsin hot shoe recorded his lone Midwest Tour victory.  Chris Weinkauf, who has been a regular on the Tour for years is the other three-time Detjens winner.  Weinkauf completed the feat in 2003, 2010 and 2011.  Running a limited schedule this season, Weinkauf remains a contender.  The 2015 SPS Champion, Jeremy Lepak will be making his first Tour attempt in years.  Having won back to back National Short Track Championships at Rockford and a Slinger Super Speedway Championship, Lepak knows how to win on the big stage.  Dillon Hammond recorded a fifth place finish at SPS two seasons ago in Tour action and will make his second start of 2019.

Three Kulwicki Driver Development Drivers will attempt to add their names to the Detjens record books.  Luke Fenhaus, the 2018 SPS track Champion who had two wins at his home track last season will be making his third ever tour start.  Carson Kvapil, who calls Mooresville, NC home, was the most recent Tour winner in Central Wisconsin last August at Golden Sands and finished second to Johnson at Rockford.  The second generation driver is currently leading the Rookie of the Year battle.  Paul Shafer, Jr has become quite popular not only in Midwest Racing circles but across the nation with Dale Earnhardt, Jr taking notice of this front running driver who recorded his first Tour win last May at Jefferson.  Shafer, the 2013 Illiana Motor Speedway Champ is currently fourth in Tour standings.

The Midwest Tour Super Late Models will be joined Saturday night by the Bandoleros, Mini-Stocks, Mini-Mods and Pure Stocks.  Qualifying will get underway at 4:30pm with a fan autograph session to follow.  Racing action includes preliminaries and features in all divisions, with racing starting at 6pm Saturday night.  Adult general admission Saturday is $20, Kids (ages 6-12) are $10 with children ages 5 and under admitted free.  The two day Auto Select Detjens Memorial Weekend will feature the Big 8 Late Model Series on Friday night along with the Bandoleros, Mini-Stocks and Mini-Mods.  State Park Speedway is located at 5711 North Mountain Road in Wausau.  For camping and other information visit www.stateparkspeedway.com or call 715-212-9006.