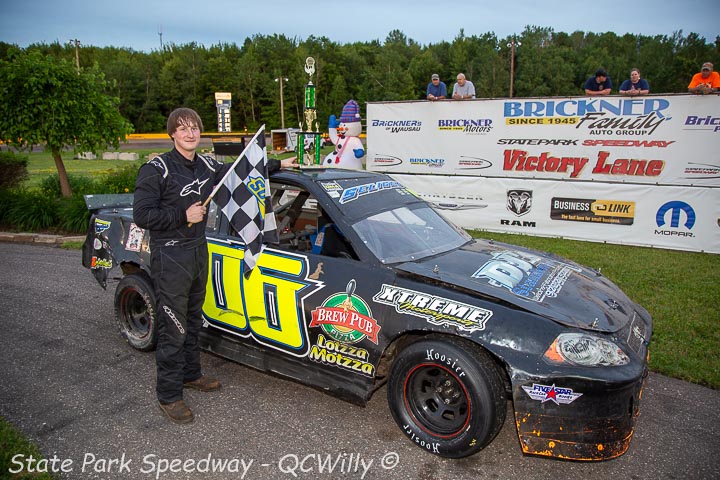 Brian Schramm, George Seliger and Kole Ferge all won championships at State Park Speedway in 2018 in their respective divisions, and all three claimed feature wins Wednesday night on Christmas in July Night. All three also came out of the night with the points lead in their classes.

Schramm won an eventful 20-lap main in the Advance Auto Parts Pure Stocks. Taking his speedway-leading third feature of the season, Schramm started third and slipped to the rear of the field before rallying back for the win.

The Wausau driver got to the bumper of leader and two-time feature winner Alex Volm on the 12th lap, and two laps later then executed a crossover move going high in turn four and then darting low coming off the corner to get inside Volm. Schramm cleared Volm on the next lap and then pulled away easily on a restart with four laps left that came after contact between Volm and Jeff Spatz caused the latter to spin on the backstretch.

“Yeah I wasn’t going to be denied that one,” Schramm said after the race of his slick move to take the lead. “This thing just handled great tonight.”

Seliger took full advantage of a caution flag in the latter stages in the 20-lap Snap-on Mini Mods feature. The three-time division champion worked outside Evan Call on a restart with six laps to go, and he pulled away for his second feature win of the season.

Call started on the inside pole and led the first 14 laps, including holding off an initial challenge by Seliger, who was outside the leader for four laps but couldn’t complete the pass and fell back behind him on lap 13. Noah Gajewski went hard into the turn two tires two laps later, though, and Seliger made the pass on the high side this time and finished well ahead of second-place Greg Blount.

“Yeah, the tires cooled off just enough, and it came in and the top side worked,” said Seliger after the race.

Edgar’s Mike Heidmann came in a strong third with a car with considerable rear end damage after an incident just past the finish line after the checkered flag in the second heat race. Call also held on for fourth in his best run of the season.

A long week of work on the car paid off for Ferge, who became the first two-time winner in the Rockstar Energy Drink Mini Stocks this season. He came from the ninth starting spot in a 12-car field and quickly worked his way to the front, passing Amanda Rowe for the lead on the ninth lap and going on to win the 20-lap race by half a straightaway over cousin Chad Ferge in second.

Rowe took the lead on the second lap after Randy Zieglmeier led the first circuit, and she held off a challenge from first-time visitor Chris Tolliver in the early laps. Kole Ferge moved past Tolliver for third on lap 6, though, got inside Evan Pingel for second a lap later, and then passed Rowe on the outside to take the top spot.

The win for Ferge came after engine issues at Marshfield Motor Speedway resulted in a new power plant put into the car just this week, with little time for testing or practice.

“It feels really good seeing as a week ago we didn’t have a motor in it,” said Ferge afterwards. “We had no idea what to expect.” Ferge also noted the work done by his crew working long days on the car and also Seliger for providing needed parts.

The next race at State Park Speedway will be Thursday, July 18th, with the Central Wisconsin Racing Association late models returning on their Stars to Legends Tour. Pure stocks, mini stocks and mini mods also will race. The night also will celebrate the latest book by Father Dale Grubba chronicling the success of Dick Trickle and Tom Reffner in their respective 67-win seasons in the 1970s. Fred Mueller Qualifying will begin at 6 p.m. with racing to follow at 7 p.m.