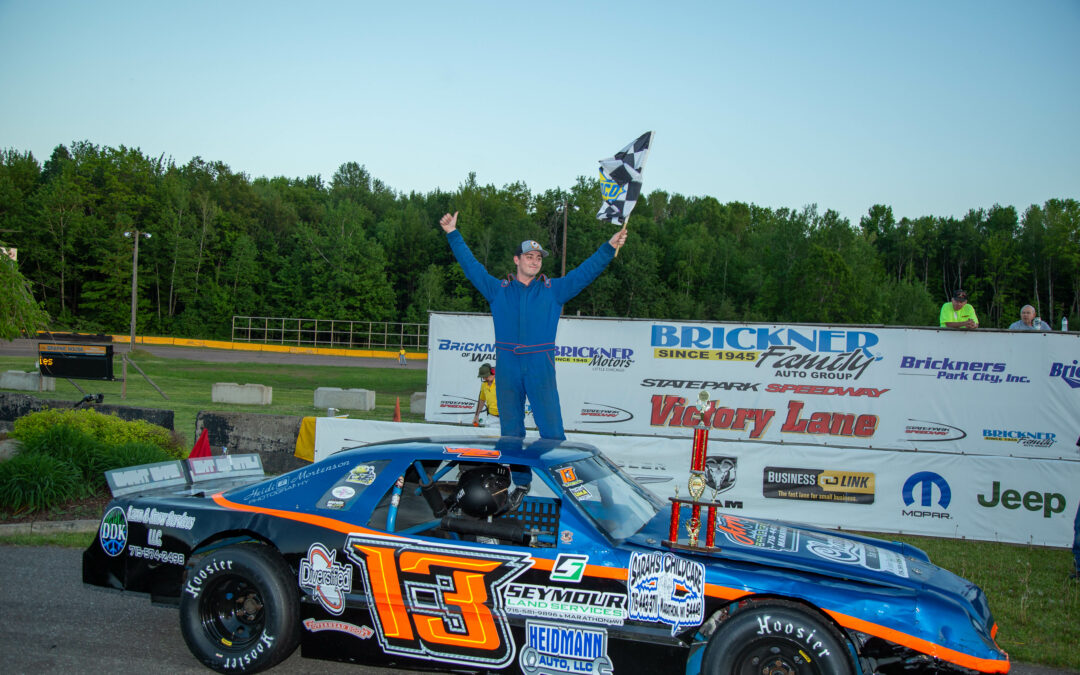 Alex Volm notched one career first in the Advance Auto Parts Pure Stocks class last week, and it didn’t take him long to record another breakthrough.

One week after his first career fast time effort in the division, the Mosinee driver rolled to the win in the 20-lap feature race, capping another big night that also included his setting fast time for the second straight week.

Volm started at the back of the field but passed early pacesetter Jeff Spatz on the outside on the 11th lap. He soon pulled away and won his first feature at the track since competing in the mini mods class in 2015.

“No, I definitely didn’t,” said Volm with a laugh in Brickner Family Auto Group Victory Lane after the race, when asked if he expected to be winning features so soon this season. “I was surprised we got fast time this year, the first night of racing was my first night in the car…it paid off pretty well hitting the outside.”

Two races into his first season in the Snap-on Mini Mods, Garret Strachota is two-for-two in feature races in the class. Strachota won for the second straight week, again outdistancing a tough group of experienced competitors in the class just behind him much of the way.

Strachota passed Jim Lietz on the inside on the fourth lap and led the rest of the way in the 20-lap race. He had plenty of company, towing George Seliger and Greg Blount just behind him for the bulk of the race. Seliger in particular got to his bumper several times, but was unable to make the pass

“I think we finally got it figured out,” said Strachota after the race of a slight problem with the car that started to surface late in his feature win the first night out. “We’ve worked really hard on this thing and it’s a good start to the year.”

Chad Ferge capped the biggest night of his young racing career with a surprise feature win in the Rockstar Energy Drink Mini Stocks. Ashley Schoone crossed the finish line first after leading all 15 laps of the main event, but she was disqualified after the race for a violation in the car’s wheel setup. Ferge finished second in the feature, coming out on top of a tough three-car duel with Kyle Check and Kole Ferge over the final five laps.

“It’s not the way we want to win,” said Ferge, a second year racer who debuted late last season after purchasing a car from Brett Breitenfeldt. “The car was fast (though). We’ve learned so much from these guys,” he said, pointing to cousin Kole Ferge’s car in the pits.