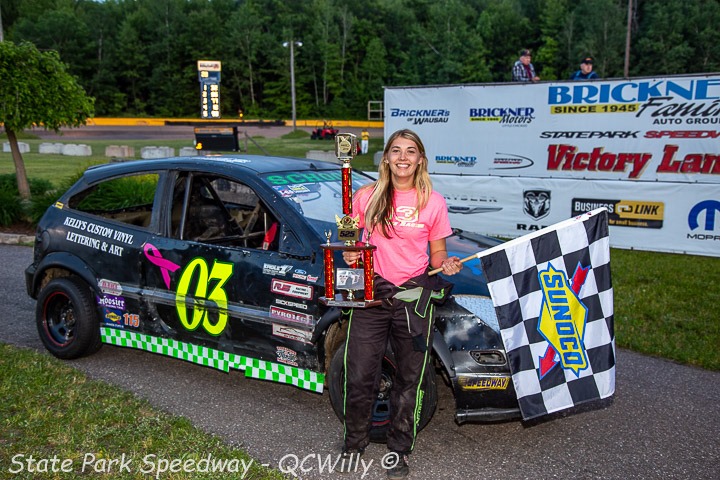 WAUSAU, Wis. (June 20) – M.G. Gajewski wasn’t the only driver to repeat in 2019 as a Flip Merwin Memorial feature winner at State Park Speedway.

Incredibly, all five divisions that raced last year and again this year saw the same winners as the 2018 Merwin race. Brian Schramm, Greg Blount, Ashley Schoone and Jevin Guralski all joined Gajewski in taking their cars to Brickner Family Auto Group Victory Lane for the second straight year in the Flip Merwin Memorial.

Schramm won his second straight feature this season in the Advance Auto Parts Pure Stocks, surviving an early skirmish that took out one of his top competitors.

Contact in turns three and four between Jeff Spatz and Brian Plisch resulted in a backup that saw Alex Volm with nowhere to go and unable to stop his car as it went nose first hard into the turn four tire barrier. Volm had set fast time earlier in the night and also won the heat race, but his car was towed off after the wreck and Schramm took full advantage.

The defending pure stock champion passed Ochodnicky on lap 5 and cruised to the win, easily outdistancing Spatz. Ochodnicky finished third with Plisch fourth, while Volm was able to get his heavily damaged car back together and out on the track to run the final two laps in finishing fifth.

“Flip was a great friend of mine…yeah, we needed to double up,” said Schramm after the race about Flip Merwin, who he also recounted last year as having lettered his first car back in the 1990s.

Fast in Fred Mueller Qualifying all season, Blount found the formula in feature racing in the Snap-on Mini Mods on Thursday. Blount backed up his fourth straight fast time effort of the season with his first feature win, passing early leader Phil Malouf on the outside on lap 14 and sailing away in the 20-lap main event.

Malouf-the 2012 mini mods champion who was making his first appearance of the season at State Park-held the field at bay for more than half of the race, but Blount eventually made his way to the front of a group of challengers just behind the leader that also included Garret Strachota and George Seliger. Strachota wound up second and Seliger third, while Malouf faded in the final laps and finished seventh.

“I was just trying to get to the front,” said Blount, who said he temporarily slowed on lap 5 because he thought he saw a caution, slipping back to third behind Seliger before passing him again on lap 7. “Once I got to the front I knew we could handle it, on a free track the car can go anywhere it wants. We did make some adjustments before the feature just to see what we could do, and it worked out.”

Schoone started on the outside pole next to Randy Zieglmeier and got a holeshot that quickly turned into a big lead. Amanda Rowe eventually made up some ground, but Schoone still won by a comfortable six car lengths for her first feature win of this season, her fourth career SPS feature win and her speedway-leading 16th race win over the last two seasons, a total that also includes 12 heat wins since the start of 2018.

“I’m just glad that I got this, because Dad got it at Eagle River last Tuesday,” Schoone said after the race, referring to her father Mark winning on dirt at Eagle River Speedway last week.

The Bandolero class also made its first appearance of 2019 at State Park Speedway. Just as it did for much of 2018, the field spent most of its time chasing Jevin Guralski.

The Wausau driver took the lead shortly after a lap 2 restart, surging from fourth to first in less than a lap, and led the last 14 laps to claim the feature win. Guralski continued his dominance in the class after winning four of the five Bandolero features a year ago on his way to the points championship.

A 13-car field to start the feature was trimmed to ten after a multi-car incident with just one lap complete. The cars of Ayrton Brockhouse and Anna Malouf became hooked together after contact, and the chain reaction resulted in Iowa racer Kody King sliding hard into the turn four tires and water barrels barrier. Brockhouse, King and Robbie Rucks all were unable to continue, though Malouf returned just before the restart and came back to finish fourth, behind only Guralski, runner-up Alex Hartwig and third-place finisher Michael Guderski.

Next week at State Park Speedway is Wausau Noon Optimists Kids’ Night and also the Dave Lashua Memorial Race. Youth are encouraged to bring their bicycles for bike races on the track. The Central Wisconsin Racing Association late models will be on hand as part of their Stars to Legends Tour, joined by SPS regular support class pure stocks, mini stocks and mini mods. Fred Mueller Qualifying will begin at 6 p.m. with racing to follow at 7 p.m.