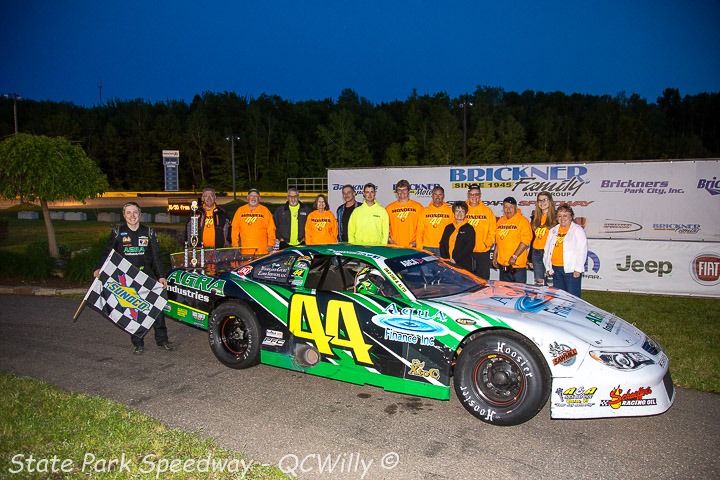 From start to finish, Justin Mondeik left no doubt about who had the best car at State Park Speedway Thursday night.

Mondeik brought out the broom for a clean sweep in the Auto Select Super Late Model class, claiming fast time, winning his heat race and then taking the 50-lap feature event on Throwback Thursday at the track for his first feature win of the season.

The Gleason driver passed Jay Van Der Geest on the 25th lap of the retro night’s main event for his third-ever super late model feature win at State Park and his first in almost exactly a year. Mondeik also won the feature just under a year ago on June 14, 2018.

Mondeik worked patiently but quickly through the field from his seventh starting spot. He was fourth on a lap 12 restart after the race’s lone caution for a spin by Travis Volm; passed Neil Knoblock on the outside for second place on lap 13 and then chased Van Der Geest for six laps before the race’s only leader to that point slipped high on the backstretch on lap 25. Mondeik quickly took advantage, taking the inside and clearing Van Der Geest a lap later.

Mondeik held a comfortable lead the rest of the way even as his car tightened up. Van Der Geest stayed within striking distance and in particular made up ground in the late laps in the corners, but Mondeik pulled away on the straightaways.

“It definitely was an exciting race,” said Mondeik in a trackside post-race interview. “That caution right away I didn’t really want that because I felt like we were moving forward, and then I wasn’t sure if we wanted the outside or not. We went to the outside, and I was able to get a pretty good run and pass two cars, and then ran Jay good for a couple laps and were able to get by him. We were getting a little bit snug at the end (but) we were just able to maintain.”

“We definitely want to shoot for a championship, but we also shoot for wins throughout the year,” said Mondeik. “I think sometimes you can get caught up too much in points racing and worrying about needing this position here or there. We just test hard and try to get as fast as we can, and I think it’ll all sort itself out.”

Jeremy Lepak finished third in the feature in his first appearance at the track this year. Brock Heinrich, Mike Olson and Travis Volm also staged a spirited battle for fourth over the final 15 laps, with Heinrich edging Volm for the position while Knoblock came back for sixth at the end.