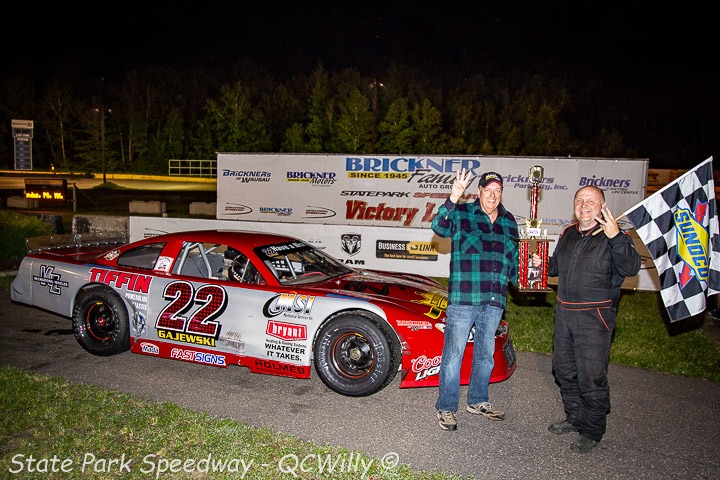 Gajewski won the Flip Merwin race for the third straight year, doing so with a dominant performance. He took the lead from Chris Weinkauf on lap 45 and pulled away to win the caution-free 75-lap Auto Select Super Late Models presented by C-Tech feature, the main event of the 15th annual race held in honor of former snowmobile racer and stock car racing crew man and supporter Philip (Flip) Merwin.

Gajewski became the first three-time winner of the Merwin race, annually one of the most prestigious races at the track. The veteran Wausau driver set a torrid pace, navigating lapped traffic and leaving just six cars on the lead lap by the end of the race and finishing nearly half a lap ahead of his nearest competition.

“I’ve got to thank all my crew, we worked hard on it,” said Gajewski after the race in Brickner Family Auto Group Victory Lane. “We were slow at the beginning of the year. We finally found what was wrong, and it showed tonight.”

As the night’s fast qualifier, Gajewski started eighth in the field of 20 cars and needed just seven laps to work his way into the top four. He soon after slipped by Jeremy Lepak for third by lap 13, putting him behind only Weinkauf and early leader Justin Mondeik.

Last week’s feature winner, Mondeik started on the outside pole and quickly took the lead, but Weinkauf moved inside Minnesota traveler Jacob Goede for second on lap 12 and then passed Mondeik on the inside on lap 22 to take first. Gajewski followed right behind inside Mondeik to take second, and then spent the next 22 laps chasing Weinkauf.

The leaders started catching lapped traffic by lap 33, and on lap 45 Gajewski was able to get inside Weinkauf, clearing him a lap later just before the two came into more lapped traffic. From there, Gajewski would pull away, with Weinkauf holding on for second just ahead of a charging Luke Fenhaus at the finish.

“It felt sweet,” said Gajewski. “I got into Chris (Weinkauf) a little bit (racing for the lead), but it was good, hard racing, I think. The car was unreal.”

Mike Olson of Dorchester finished fourth with Goede coming in fifth in his first appearance at the track in six years. The two provided one of the highlights of the race, going side-by-side for six laps before Olson made the pass on the way to his best finish of the season.

Brock Heinrich of Wausau was the only other to complete all 75 laps, while Ryan Hinner of Stevens Point finished seventh in his first time out at the track this year and was first among seven cars one lap down. Travis Volm, Jay Van Der Geest and Jeff Storm rounded out the top 10, with 17 of 20 cars still running at the finish.