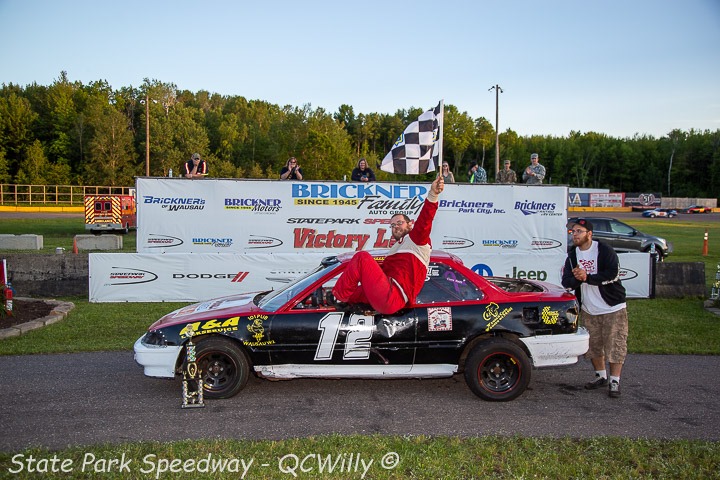 Throwback Thursday at State Park Speedway also was a throwback to just a year ago as a pair of defending division champions took checkered flags in feature racing for the first time this season.

Schramm capped a good night that also included setting fast time, slipping inside Volm for second on lap 6 and then passing Kolton Guralski on the outside halfway through. Volm closed in on the leader in the final laps, getting to his bumper with just over two to go, but Schramm kept his car glued to the bottom and finished 1 1/2 car lengths ahead at the checkers.

“I could see him coming,” said Schramm of Volm after the race. “You can’t give up the bottom here, not a whole lot of guys go to the top but you’ve got to go there once in a while. It feels good, we finally got the car back where it should be.”

George Seliger is another driver who has been no stranger to Brickner Family Auto Group Victory Lane in the past and made his return there Thursday night. The three-time defending champion in the Snap-on Mini Mods, Seliger won the 20-lap feature race, holding off Greg Blount for his first feature win of the season.

Seliger inherited the lead after a lap 3 yellow for John Lietz’s car leaking fluid, and a stack up on the front stretch taking the flag resulted in Noah Gajewski getting spun into the bricks framing victory lane. Seliger then quickly got away from fast timer Greg Blount on the restart and held the point the rest of the way, flawless running a slightly higher groove even as Blount lurked several car lengths back most of the way.

“It’s always a toss-up, but tonight it came together,” Seliger said after the race of his win, which came just over a month after an accident on the half mile at Wisconsin International Raceway in a Midwest Dash Series race.

The night also included a first time feature winner in the Rockstar Energy Mini Stocks for the second straight week. Wausau’s Tom Lecher led all 15 laps for his first-ever feature win at State Park Speedway and became the third different feature winner in three races in the class.

Lecher started on the front row outside Kyle Check, and the two ran side-by-side for the first eight laps. The 2018 Marshfield Motor Speedway Bandit Division champion, Lecher held a slight lead every lap, though, cleared Check on lap 9 and led the rest of the way. Check held on for second after a final lap challenge from Kole Ferge, with Evan Pingel slipping in just ahead of Ferge at the line for third.

“It feels real good,” said Lecher after the race of his first feature win at the track. “We made a few changes to the car after the heat race because the car was pushing really bad. It was pushing in the feature but we got it to the front and got the win.”

Next up at State Park Speedway is the Flip Merwin Memorial next Thursday. Super late models and support divisions will be on hand, and the Mighty Bandoleros will also make their first appearance at the track this season. Fred Mueller Qualifying will begin at 6 p.m. with racing to follow at 7 p.m.