VanDerGeest Back in Victory Lane at SPS Opener 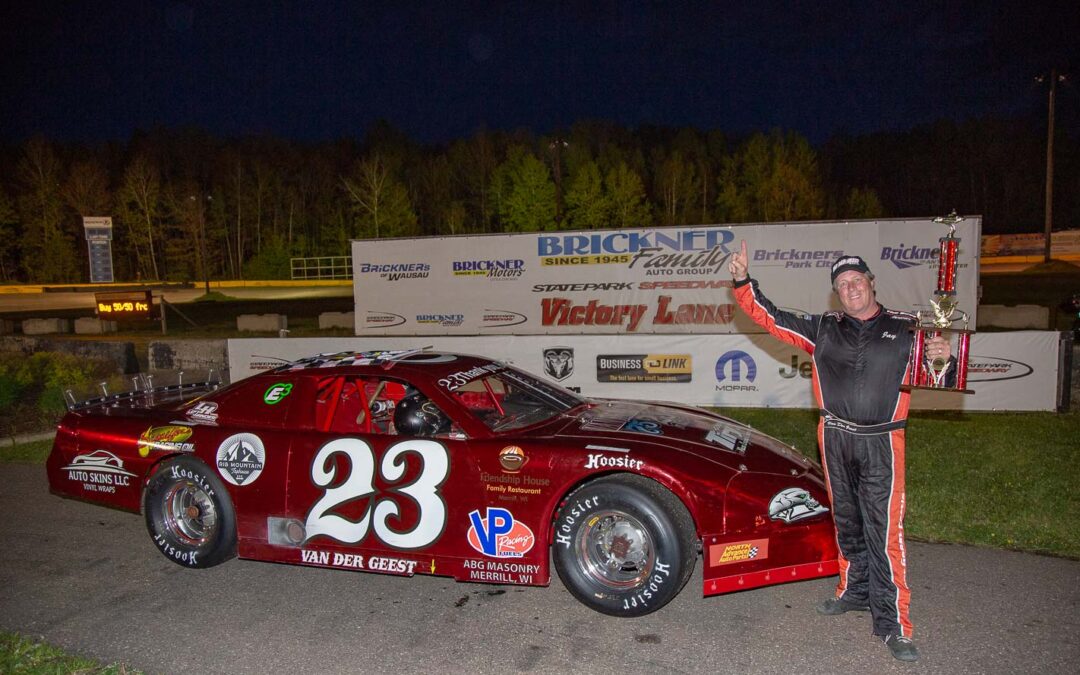 Jay Van Der Geest had a quiet 2018 season at State Park Speedway, but it took just one race to remind all of his capabilities and establish him as a factor at the track in 2019.

Van Der Geest raced just twice at the track a year ago, but in this year’s season opener took the early lead and later turned back a challenge from teammate Jason Weinkauf, who spent the better part of 20 laps on the leader’s back bumper.

Van Der Geest and Weinkauf pulled away from the field early, with both passing Mackesy soon after a lap 2 restart. Weinkauf was in Van Der Geest’s tracks from lap 10 to past the halfway point, until he had company of his own when Derek Kraus and Neil Knoblock also closed in on the lead two.

Kraus and Weinkauf spent four laps side-by-side before Kraus completed the pass on the inside on lap 36, but that was enough time for Van Der Geest to gain some breathing room from the rest of the field. He held a comfortable margin the rest of the way and finished six car lengths ahead of Kraus at the line, with Knoblock, Weinkauf and Mike Olson following as second through fifth finished nose-to-tail at the end.

“Mark gave me a heck of a try there,” said Van Der Geest after the race. “Once it settled in the car was really good from start to end.”

Opening night did not go as well for either of the main players in last year’s super late model points race that went down to the wire. Defending super late model champion Luke Fenhaus and last year’s runner-up Justin Mondeik both received damage after the field bunched up on the front stretch on lap 2 after leader Mackesy spun in front of the field after a tap from Neil Knoblock. Fenhaus would complete all 50 laps, finishing sixth with right front and rear end damage, but Mondeik had to be towed off and placed 10th.