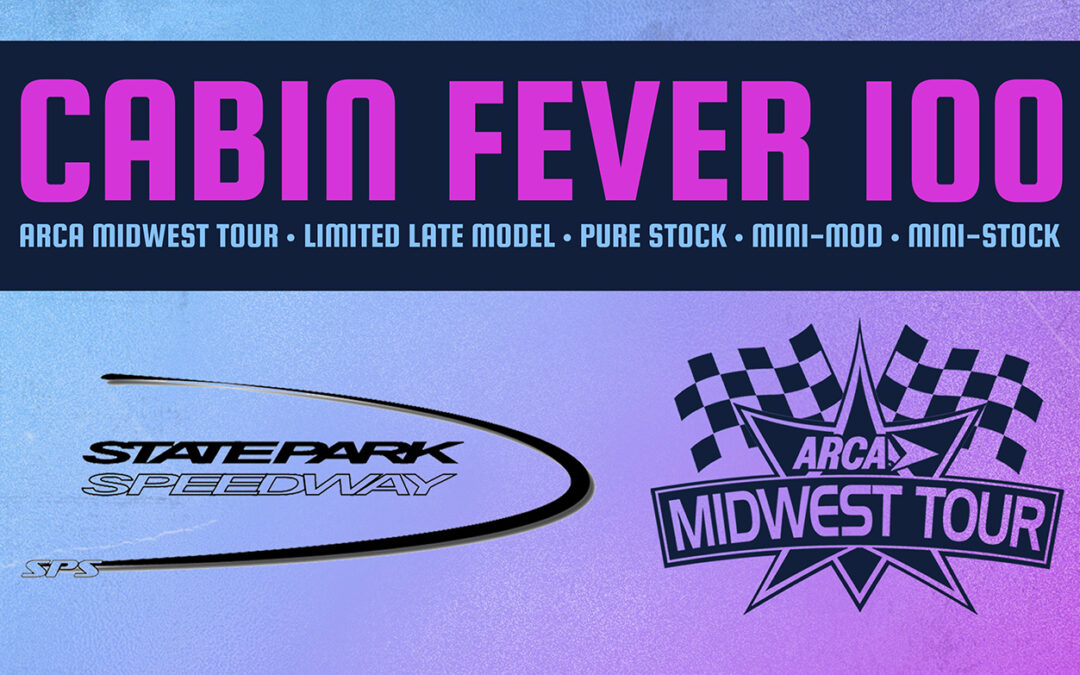 Wausau, WI- Andrew Morrissey will lead the charge of ARCA Midwest Tour Super Late Model Drivers into this Saturday’s (May 18) Cabin Fever 100 at State Park Speedway in Wausau.  A dominating performance by the 2011 Tour Champ in route to victory in 2018 has him atop the list of favorites as Morrissey and the ‘Stars and Cars’ take on Central Wisconsin’s Best on Saturday night, racing action is slated to begin at 6pm.

Morrissey, who also collected the Oktoberfest 200 hardware at LaCrosse last season, will be joined by other 2018 Tour event winners Saturday night.  Carson Kvapil, who calls Mooresville, NC home, was the most recent Tour winner in Central Wisconsin last August at Golden Sands.  The second generation driver is now in search of Rookie of the Year honors.  Austion Nason had a stellar season in 2018, not only recording his first tour triumph in the Joe Shear Classic but also laying claim to the MIS Super Late Model Triple Crown Title and adding the Kar Korner All-Star 100 at Rockford Speedway to his resume.  Paul Shafer, Jr has become quite popular not only in Midwest Racing circles but across the nation with Dale Earnhardt, Jr taking notice of this front running driver who finally recorded his first Tour win last May at Jefferson.

Having won three NASCAR K&N features in a row including a sweep last weekend in Tucson, AZ, Derek Kraus is set to return to the Super Late Model ranks this weekend.  Kraus, the youngest winner in Tour history will be joined by his father Mark in the Cabin Fever 100 field.  They have never competed head to head, that all changes at State Park Speedway this Saturday.

Two of the hottest drivers to kick of 2019 will be in action Saturday night as well.  Rich Bickle, Jr has been on a roll, with finishes of third at the Dells Icebreaker and a runner-up effort two weeks ago during the Joe Shear Classic at Madison.  The former NASCAR standout has new found speed to go along with his winner’s determination behind the wheel of his familiar #45.

Hot off his win the Icebreaker 100 at Dells Raceway Park, Casey Johnson captured the 2018 Fox River Racing Club Championship in his Dennis Chase owned #47, the same car he will pilot Saturday night.

2018 State Park Speedway Champion Luke Fenhaus will be one to watch Saturday, his only Tour start came during last year’s Oktoberfest 200 where the young pilot rocketed to the lead before mechanical woes ended his day.  Touring Star Justin Mondiek returns to his home track, Mondiek finished second in points at State Park last season with multiple feature victories to his credit.  With one Tour win a piece, the Central Wisconsin Championship winning brothers (Marshfield, Wisconsin Challenge Series) of Chris and Jason Weinkauf will surely be in contention at the tricky quarter mile.  Central Wisconsin mainstay MG Gajewski will be joined by Speedweeks Runner-Up Gabe Sommers, who showed a lot of speed during the Joe Shear Classic.  Fifth place SPS point finisher Derek Doerr and top 2018 Tour Rookie contender Dillon Hammond are also names familiar with SPS.

The Midwest Tour Super Late Models will be joined by the Limited Late Models, Pure Stocks, Mini-Mods and Mini-Stocks.  Qualifying will get underway at 4:30pm with a fan autograph session to follow.  Racing action includes preliminaries and features in all divisions, with racing starting at 6pm Saturday night.  Adult general admission is $20, Kids (ages 6-12) are $10 with children ages 5 and under admitted free.  State Park Speedway is located at 5711 North Mountain Road in Wausau.  Visit www.stateparkspeedway.com or call 715-212-9006 for additional information.