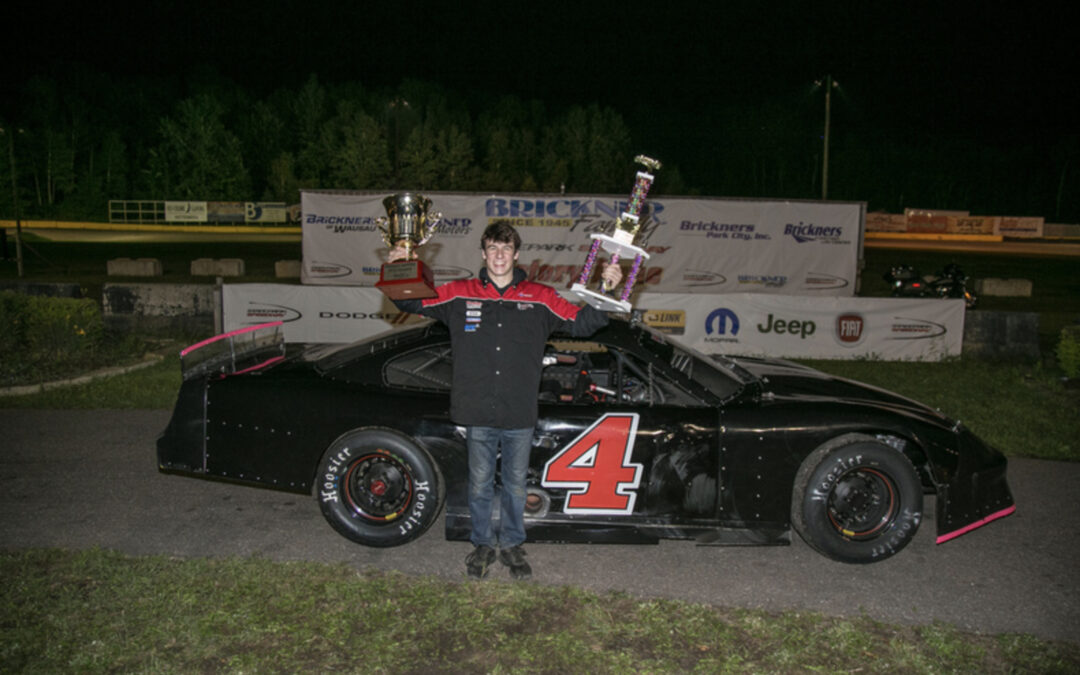 The final race and final points battle of the 2018 State Park Speedway race season could not have been more dramatic if it were scripted, as the fight for the Auto Select Super Late Models pres. by C-Tech points championship came down to the last lap and literally a few inches.

In the end, it was 14-year old Luke Fenhaus of Wausau winning the Fighting Cancer Full Throttle 60 final feature race of the season, passing Neil Knoblock for the top spot with three laps left. The late-race pass also won Fenhaus the season championship in the super late models, as he edged Gleason’s Justin Mondeik by four points in the final standings.

Fenhaus became the youngest super late model champion in the track’s history and won the title as a rookie after finishing two spots ahead of Mondeik in the feature, with Mondeik finishing thirty-one thousandths of a second behind Neil Knoblock for second in the 60-lap race. The two-position difference gave Fenhaus enough points to take the title from behind, after he trailed Mondeik by 12 points entering the night.

“Yeah it was an awesome race,” said Fenhaus. “I’ve just got to thank all the guys working on the car…it was a great season.”

Fenhaus passed Knoblock on the outside with three laps remaining, shortly after the top three cars checked up while trying to work around a lapped car. He took the lead and went on to win, and on the final lap the suspense came with whether Mondeik would be able to get by Knoblock for second.

Knoblock drifted high in turn two, giving Mondeik an opening to the inside, but after the two raced hard into turns three and four, Knoblock held him off by a whisker at the line, with Mondeik giving everything he had and spinning shortly past the finish line. The five-point swing between second and third, though, was enough to give the points title to Fenhaus.

The finish capped an outstanding season-long battle between Fenhaus and Mondeik at the top of the standings, and a riveting final 30 laps in Thursday night’s feature where the championship outcome was in doubt even immediately after the cars crossed the finish line.

Fenhaus took the lead from Knoblock on lap 19 and held the lead to a mid-race break. Fenhaus chose the outside line on the restart, though, and the veteran Knoblock quickly made him pay for it, taking the lead and relegating Fenhaus to second.

Fenhaus spent the next 25 laps trying to find a way inside or outside around Knoblock, who kept his car pinned to the inside and fended off the challenge every time Fenhaus tried to pass on the outside. Meanwhile, Mondeik was in third, attempting to stay on the back bumper of Fenhaus wherever he went, knowing that he could finish one spot behind the Wausau East freshman and it would be enough to clinch the championship.

The strategy worked until the leaders came up on the lapped car of Travis Dodson on the frontstretch at the end of lap 54, with Dodson trying to get to the inside in front of them and leaving the top three bunching up even closer in turn one. Fenhaus eventually got outside Knoblock on lap 57, leading at the line and clearing him a lap later, with Mondeik left just short of time to also get by for second.

“The car just fell away after that caution, it was too tight center-off,” said Fenhaus. “I just couldn’t get a real good run off (the corner), but we kept working, it paid off and it worked.”

Mark Mackesy of Wausau finished fourth in the feature, with Mike Olson of Dorchester in fifth and Watertown’s Derek Doerr taking sixth. The three also finished in that order in the final standings behind the leaders, with Mackesy placing third for the year, Olson in fourth and Doerr in fifth.