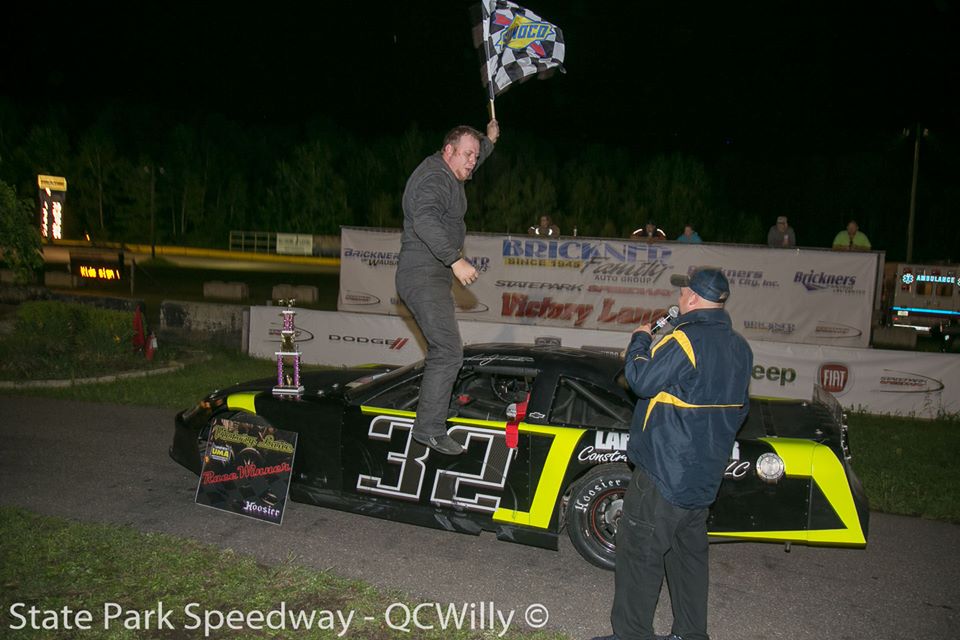 Along with points champions being crowned in five divisions, the final race night of the season at State Park Speedway also furnished a first-time winner in the Budweiser Fabiano Brothers Limited Late Models.

Brock Heinrich of Wausau won his second consecutive limited late models division title, cruising to a fifth-place finish in the feature that wrapped up a year where he won five feature races. Heinrich completed his second straight superb year in the class, a run that has included a total of nine feature wins and top-five finishes in all 23 races over the last two years.

“It’s a great feeling, a lot of hard work paid off,” said Heinrich after the race. “The first season we had to come from behind, it was a lot of behind-the-wheel work. This year we had to learn the mechanics a lot more.

“We wrecked a few things, we had to repair the rear end, a lot of times things changed every week, we had some stiff competition coming up from the pure stock class moving up. It’s just really rewarding to finish the season strong and come away with another championship.”

The final night of the year, though, belonged to Adam Rodemeier, who won his first-ever race at State Park by taking the 25-lap limited lates main. In his first full season of racing at the speedway after years of racing snowmobiles and sport modified cars on dirt, Rodemeier’s feature win was one of the most pleasant surprises of any at the track this year.

Rodemeier battled Todd Handrick side-by-side for the first 12 laps before clearing him on the outside, and then appeared on his way to victory until a Dillon Mackesy spun on the backstretch after contact from Travis Volm with three laps left. That put Mitch Stankowski alongside Rodemeier on the restart, and the two co-workers during the week were even at the line with two laps to go, but Rodemeier pulled away on the backstretch on the next lap and went on to the win.

“We’ve been working on the car, we’re kind of on a limited budget here,” said Rodemeier after the race in Brickner Family Auto Group Victory Lane, “but last time we raced here, Mitch and I, I kind of used him up a bit on the outside and we joked about it all week at work. So it was kind of neat to see him on the outside again. It’s definitely awesome.

“I was super stoked. I was yelling at my brother spotting, asking ‘How many laps to go?’ and he said ‘twenty’…woo, it was a long way.”

Brian Schramm clinched the season points title in the Advance Auto Parts Pure Stocks, and while he wasn’t in victory lane after the feature on the season’s final night, one of his cars was.

Dave Cabelka of Wausau drove Schramm’s second car for the night and led all 25 laps for his first-ever feature win in the class. Cabelka, a feature winner in super late models and limited late models at State Park Speedway in the past, started on the inside of the front row and won while racing his first weekly show at the track this season. He held onto the lead after Dustin Ochodnicky made a charge in the middle of the race, and then again cleared Ochodnicky after a restart with three laps left.

“It was really good in the heat and in the feature,” said Cabelka after the race. “In the qualifying and in the hot laps I was trying to get used to the bombers again,” he said of racing the pure stock car for the first time in 20 years.
Schramm won his first track championship since winning the bombers title in 2000. The Wausau racer took 14 years off of racing before returning three years ago, but another points title was still the goal this year.

“That’s always our goal,” said Schramm. “We had the old car, it was good but we bought a new car for this year and it’s run real well.”

Wausau’s George Seliger finished his late-season surge with a feature win on his way to clinching the season title in the Snap-on Mini Mods. Seliger took the lead from John Lietz on a lap 18 restart and went on to the win, clinching the points title after a tough season-long battle with Mike Heidmann and Greg Blount.

“After everything, it’s been a tough couple weeks, but this race makes up for it,” said Seliger afterwards after clinching his third straight championship in the mini mods class.

Kole Ferge of Schofield also closed out a championship season in the Motors Service & Supply Mini Stocks with a feature win, coming home first in the 25-lap race.

Ferge won a 12-lap side-by-side battle with Amanda Rowe for the top spot, finally clearing her on lap 20 and pulling away for the win. The most consistent driver in the division by far this season with top-five finishes in all 14 features, Ferge nabbed his second feature victory to cap a memorable season driving the car formerly raced by the late Robb Wruck.

Fellow mini stock driver Kevin Tessmer, who finished fifth in the feature, stopped on the frontstretch to congratulate Ferge afterward and then in an impromptu post-race interview talked about how much he enjoyed racing with Ferge this year.

“I love being around him. He’s always made things entertaining,” said Tessmer. “I can’t say enough. He comes in, first year doing anything like this and he kicks everybody’s butt. It’s awesome.”