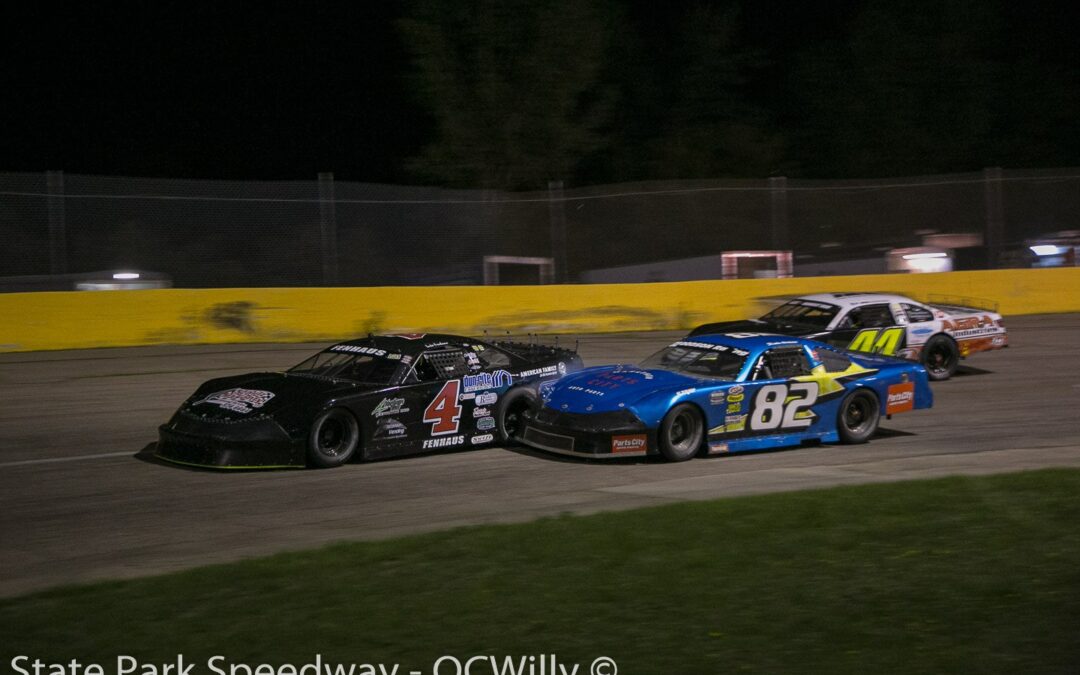 A move to a new car kept Luke Fenhaus’s hopes of a track championship very much alive at State Park Speedway Thursday night.

Driving a new car after an accident did heavy damage to his previous car the week before, Fenhaus was fast from the start Thursday night. He first set fast time in Fred Mueller Qualifying and later got to the front just after the midway point in the Auto Select Super Late Models presented by C-Tech feature. Fenhaus won the 66-lap Wayne ‘Lodi’ Lodholz Memorial Race for his second division feature of the year and set the stage for a down-to-the-wire battle next week for the points championship in the class.

Fenhaus finished ahead of Gleason’s Justin Mondeik in the feature Thursday, and the 14-year old from Wausau now trails Mondeik by just 12 points entering the final race of the season next week. Both are shooting for their first-ever titles in the division at State Park.

A week earlier, Fenhaus wasn’t even certain if he’d be able to finish out the season, after heavy damage to the steering and rear end left his car needing a host of repairs. Hard work by his crew throughout the week got a second car ready, though, and it paid off as Fenhaus got past Mondeik on lap 39 and pulled away to win by a full straightaway over Mondeik and the rest of the field.

“This car was on a roll all day long,” said Fenhaus. “Just a great recovery… I’m so proud of the guys that helped with the car.”

Mondeik started on the inside pole and led the first 38 laps. Fenhaus started fifth but got to second on 14, then set his sights on the leader.

Fenhaus chased Mondeik for 10 laps before finally completing the pass. He tried the outside before settling back in behind the leader just before a mid-point competition caution, and then took advantage of Mondeik getting loose on lap 39, with the two cars banging doors but Fenhaus completing the pass and leading the rest of the way.

The feature got off to a bad start before the green flag when Jeremy Lepak’s car broke during warm-up laps. Lepak shot across the track and hard into the tires in turn one, and Mike Olson and M.G. Gajewski also were collected, with Olson getting clipped and spinning, backing into the outside wall, while Gajewski also got into the tires.

Lepak’s night was done and Gajewski could only complete one lap in the feature before pulling off, but Olson came back to finish third in the feature despite damage to his left rear. Jay Van Der Geest also made his first appearance at the track this year and was fourth in the feature.

The Motors Service & Supply Mini Stocks have consistently exhibited some of the most entertaining and competitive racing at State Park Speedway all season long, and Amanda Rowe and Kevin Tessmer provided arguably the best show yet in the class this year on Thursday during the Wayne ‘Lodi’ Lodholz Memorial Race.

Rowe and Tessmer raced side-by-side for the final 14 laps of the 20-lap feature race, and at the end it was Rowe winning by inches, the finish decided by nine thousandths of a second. The Mosinee racer won her fifth feature of the season, most of any mini stock driver.

Rowe took the lead after starting on the inside of the front row and led up to a lap seven caution following contact between Nathan Steif and Evan Pingel racing for third, rubbing that sent Pingel airborne over the edge of a mound surrounding a light pole on the backstretch. Pingel stayed in the throttle the whole way and kept his car going, but the yellow came out for debris on the track and Steif retired from the race with damage.

The restart left Rowe and Tessmer on the front row, and neither broke free from the other the rest of the way. Rowe led by inches at the line on laps seven and eight, then Tessmer did the same on laps nine and 10. Rowe then took the lead back and nearly cleared Tessmer until he fought back and led at the line against by a nose on lap 18. The final two laps were wheel-to-wheel, with Rowe on the inside having just enough for the victory.

“I saw him come up on the outside (on the restart)…so I knew it was going to be a tough race,” said Rowe after the race. “It was a great race, though, it was clean, it was a lot of fun.”

Travis Volm once again brought two cars to the track, and his dedication paid off with a feature win with one of them as he cruised to victory in the Budweiser Fabiano Brothers Limited Late Models. Volm led all 15 laps of the feature to grab his third limited late feature of the season and his eighth feature win at the track this year, most of any driver at the speedway. He also got his first feature victory in a Lodi Memorial, coming after trying for one since 2009.

“We didn’t have a very good car in qualifying,” said Volm after the race. “I didn’t even put any tires on it tonight, it’s getting to the end of the year. We just got out front and managed it, stayed there and got the win.”

Chad Dietsche recovered nicely from a tough night a week ago, showing strength in winning the 25-lap Advance Auto Parts Pure Stocks main. The Hatley racer got to the front by passing Alex Volm on a lap three restart, and he led the rest of the way,

Including fending off the late challenge of Travis Volm to win.

Dietsche stayed out front the final 23 laps, with Travis Volm unable to make up serious ground until late and points leader Brian Schramm unable to make significant headway in the field behind them. Volm cut a six-car length deficit to 1 1/2 in the final laps but got loose on the final lap and couldn’t keep Dietsche from his fourth feature win of the year.

“Yeah, it was pretty terrible last week, we pulled out-we still don’t know what’s wrong with the car,” said Dietsche in Brickner Family Auto Group Victory Lane after the race. “We changed a lot of parts, and I was running with it.

Mike Heidmann also got to the front after a restart and stayed there the rest of the way, winning in the Snap-on Mini Mods for his third feature win of the season. The Edgar driver also ensured that the division’s points race will come down to the final week, with Heidmann, George Seliger and Greg Blount all with a chance to win the championship.

John Lietz looked to be possibly in line for his first feature win of the season when he led the first 17 laps of the 25-lap race, even as Heidmann was knocking on the door for first when Gary Garand spun on the front straight to bring out a yellow with eight to go. On the restart, Heidmann got a good run on the outside and cleared Lietz and went on to the victory.

Heidmann was apologetic after the race for contact with Lietz just before passing him for the top spot. “Points racing makes you do crazy things,” said Heidmann after the race. “I was perfectly fine and content with second place until I saw George (Seliger) coming, and it just makes you do stuff that you normally wouldn’t do, so I apologize to John for ‘boogering’ him and getting by him, but I just had to do something. He was just too good on the bottom, I couldn’t get around him.”

Jevin Guralski capped a points title in the Mighty Bandoleros class in fitting fashion, winning his fourth feature in five nights of racing at the track this year. Guralski won the division’s season championship race by getting inside the loose car of Laney Osborne on lap five, and he then held off Osborne the rest of the way to win by two car lengths. He clinched the Bandos title one year after his brother Kolton won the points championship in the division.