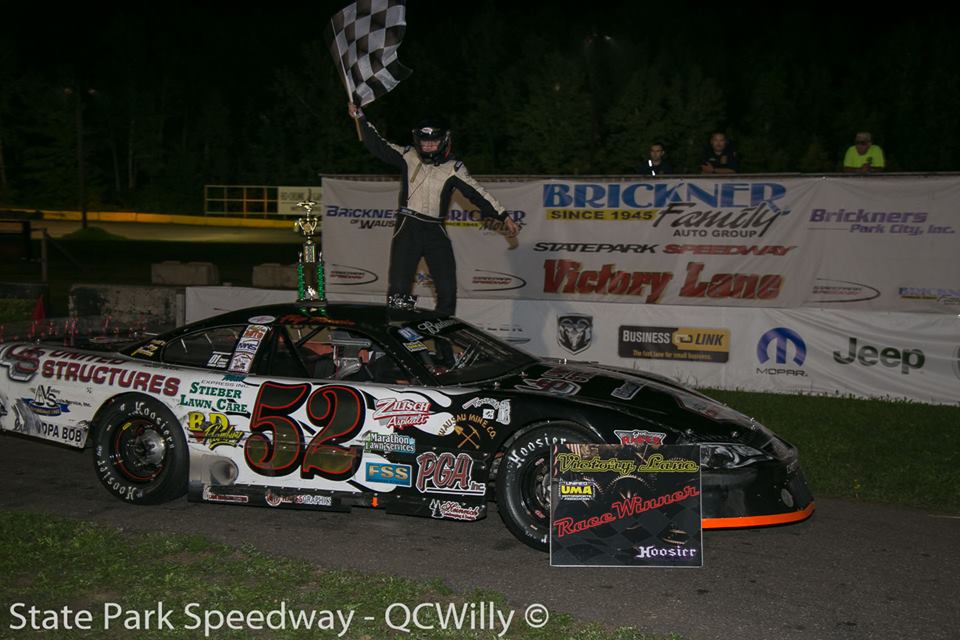 Brock Heinrich has had plenty of success in the Budweiser Fabiano Brothers Limited Late Models at State Park Speedway the last two seasons, but Thursday night may have topped it all.

Heinrich went to the outside lane in the final four laps to go from third to first and nipped Dillon Mackesy by a nose at the checkered flag for his fifth feature win of the season. His win by 32 thousandths of a second was the closest in a feature this season at the track.

Brian Schramm posted an easy clean sweep in the Advance Auto Parts Pure Stocks, setting fast time in Fred Mueller Qualifying, winning his heat and then jumping to the lead early and cruising to the feature win. The veteran Wausau racer earned his fifth feature of the season, tying Heinrich for the most by a driver at the track this year. He also continued to widen his lead in the point standings as second place in points Chad Dietsche had engine troubles and was unable to start the feature.

George Seliger of Wausau continued to hit his stride in the Snap-on Mini Mods, winning the feature for the second straight week. The two-time defending champion in the division worked past Gary Garand on the outside after a lap six restart and cruised to his third feature win of the season.

Seliger also gained more ground in the point standings with his win combined with a tough night for previous points leader Mike Heidmann, who received damage in a heat race tangle and could not start the feature. Greg Blount now leads the points but Seliger is just 14 points behind him, while Heidmann slipped back to third, 31 points behind Blount.

Ashley Schoone of Tomahawk led almost the whole way in winning her third feature of the season in the Motors Service & Supply Mini Stocks. Schoone wheeled her 2003 Ford Focus hatchback to the front early and led 19 of 20 laps, taking the lead on lap two and checking out after a lap three restart to top a 13-car field. Ringle’s Evan Pingel finished a career-best second and Tom Lecher of Wausau tied for his best-ever feature finish at the track by placing third.

Jevin Guralski of Wausau posted his third feature win of the season in four nights of racing for the Mighty Bandolero class. Guralski led all 12 laps but had to hold off fast qualifier Alex Hartwig of Portage almost the whole way, staying to the inside while Hartwig ran the outside line and got close but never could complete the pass.