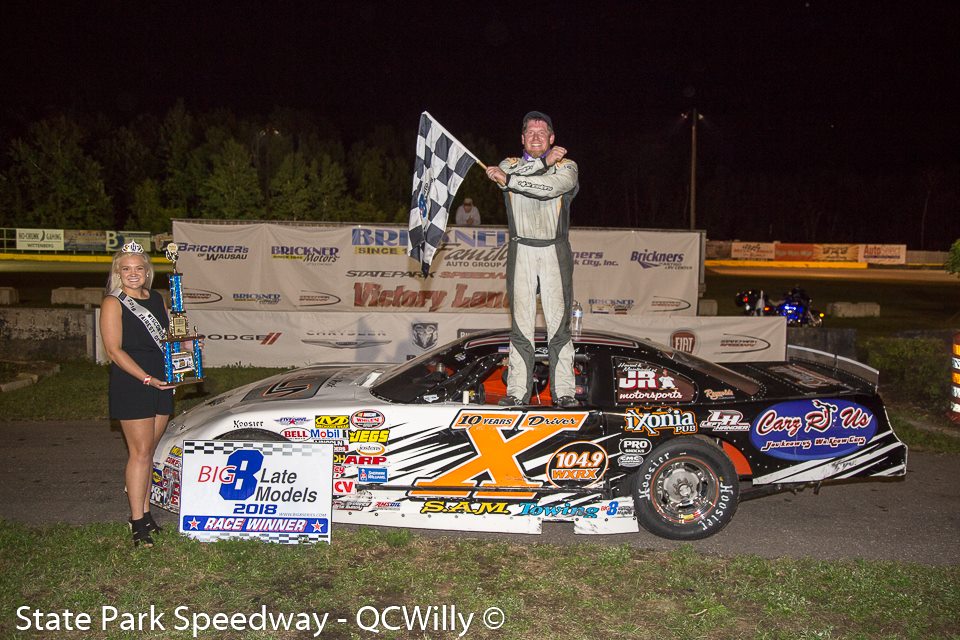 In both trips, the number 10 figured heavily into the equation, maybe all too appropriate for the Loves Park, Ill., racer known as Driver X. More importantly, the final results were a success both times for Reynolds, including Friday night when he won the 58-lap Big 8 Late Models feature, highlighting the first night of the 38th annual Larry Detjens Memorial at the track.

Reynolds came from starting 10th in the field, took the lead from Michael Ostdiek on lap 32 and pulled away to win by a full straightaway over Ostdiek and the field for his second Big 8 win in the series’ seven visits to State Park Speedway. It also was the 12th Big 8 feature win all-time for Reynolds, who is one victory behind leaders Michael Bilderback and Jeremy Miller for series honors.

The pass that would decide the race’s eventual winner didn’t come easily for Reynolds. He got inside Ostdiek on the backstretch on the 32nd circuit and cleared him quickly as Ostdiek backed off in the corner in an attempt to cross over underneath Reynolds himself.

Reynolds was not fazed, but Ostdiek was not finished, either. The 2016 winner of the Big 8’s trip to the track got into the back of Reynolds two laps later in turns three and four, causing both cars to get loose. Reynolds saved his car from spinning, and Grant Brown briefly made his way all the way up to second, sneaking past Ostdiek.

Brown and Ostdiek would battle for second for the next 14 laps, including getting side-by-side on two different occasions. That was good news for Reynolds, who worked lapped traffic and drove away from the rest of the leaders to build a big lead he never relinquished.

The race’s opening stages were dominated by Nick Egan, who started on the pole and led the first 19 laps convincingly. Egan showed strength while pulling away after the first restart, but was never the same after the second restart. He drifted up the track on the second and was passed by Ostdiek on lap 20, and soon faded back to fifth before being involved in a tangle with Rayce Haase on lap 26 that sent both to the back.

Reynolds bided his time early but got some help when the race’s complexion changed dramatically on the 17th lap. Racing deep in the pack, Hunter Drefahl and Todd Handrick got together in turn one, with Handrick’s car coming to a stop in the middle of the track. The leaders came around and a number of them ran straight into trouble, with third-place Jacob Nottestad, points leader Miller and fast qualifier Brody Willett all suffering damage that took them out of the race.

There was more bad news for frontrunners a few laps later after the restart. A fierce battle for position on lap 18 resulted in the cars of Ostdiek, Jerry Mueller and Joe Neisius going three-wide into turn three.

All three cars came out without incident, but the same couldn’t be said when another three-wide run into the third turn resulted in contact between third-place Jerry Mueller and State Park Speedway regular Travis Volm, causing the latter to spin into the middle of the track between the third and fourth turns. Minnesota’s Jared Duda was unable to avoid him, causing heavy damage to the nose of Volm’s car.

Volm was able to return despite missing the front nose sheet metal on his car and briefly moved back up to fifth, but the rest of the race belonged to Reynolds.

Ostdiek finished second in his first start on the tour this year, while Neisius finished third. Brown finished fourth and Mueller came back to finish fifth.

“This is definitely a racy track, we just came up a little short,” said Ostdiek. “I think we were a second-place car, Reynolds he sure was quick…but all in all it was a good night for us.”

“It’s our first time here, it’s definitely got some quirks, it’s tricky to drive this place,” said Neisius. “I’ll take a third coming out here against these guys that have been here several times.”