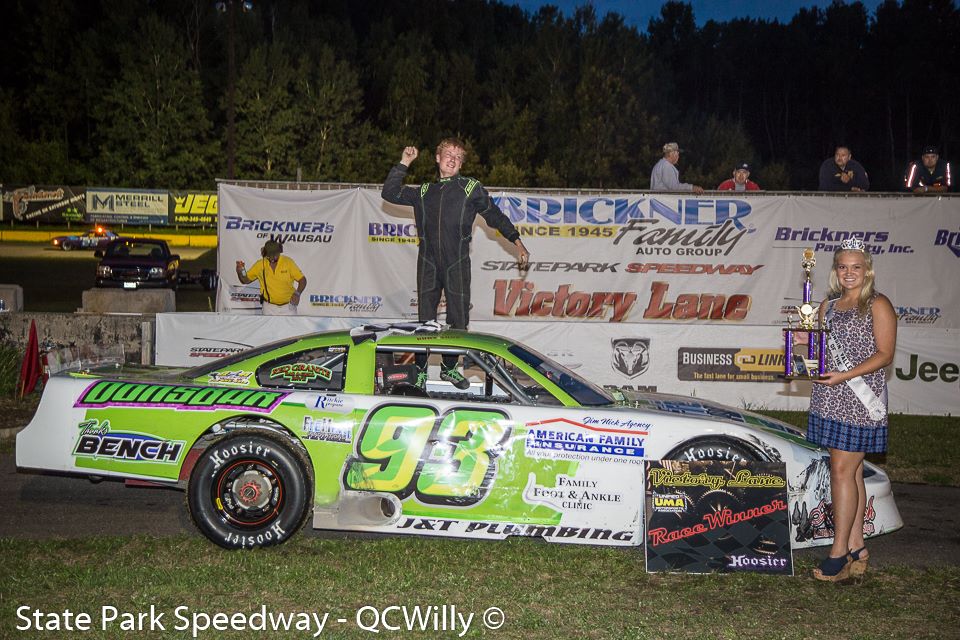 There was little doubt from the start that Dillon Mackesy was hooked up in the Budweiser Fabiano Brothers Limited Late Models, and the third-generation driver from Athens rolled to wins in the heat race and the 25-lap feature.

Mackesy took the lead on lap three, getting by visiting driver Jerry Mueller of Richfield, who raced in the Big 8 race the night before and also raced a super late model Saturday night. Mackesy took off from the rest of the pack to win easily, while Brock Heinrich emerged from a nearly race-long battle with Rayce Haase to finish second.

In a highly competitive Advance Auto Parts Pure Stocks feature, it was five-time division champion Travis Volm of Mosinee rising to the top again to win the 25-lap race. Volm completed the seventh lead change of the race among five different leaders, getting inside Brandon Knoblock on lap 20 and going on to his second win of the season in the class. Knoblock finished second in his first trip to the track this year, coming out ahead of a mid-race 12-lap battle for the lead with Anthony Lashua before Volm got by both late.

Zach Onson returned to racing for the first time since 2016 and won the 25-lap Snap-on Mini Mods feature. A former frontrunner in the mini stocks who finished fourth in that division two years ago, the Wausau racer drove a George Seliger car to the win, going outside Dale Louze for first on lap seven and cruised the rest of the way. Tim Hintz of Nekoosa finished second in the main for the second straight night in his first two appearances at the track this year.

One of the best side-by-side battles at the track all season had a sour ending in the Motors Service & Supply Mini Stocks feature.

Wausau’s Brett Breitenfeldt and Mosinee’s Amanda Rowe put on a show of two cars numbered 14, battling for first over the final 15 laps and racing wheel-to-wheel for the last six laps of the 25-lap race. At the finish line it was Breitenfeldt by a nose, officially 34 thousandths of a second ahead of Rowe for the win. After the race, though, Breitenfeldt was disqualified for an unapproved suspension part, giving Rowe her fourth feature win of the season.

Karter Stark moved through traffic quickly and won the Mighty Bandoleros feature. Coming from Marshall in the Madison area, Stark got to the front quickly from the sixth starting spot, first moving up on the outside line and then passing Michael Guderski in the inside out of turn four on lap three for the lead. He held off two-time feature winner Jevin Guralski the rest of the way in the 15-lap race.

Racing at State Park Speedway moves back to Thursday nights with the next race on Aug. 9, when the Midwest Trucks and Midwest Dash 4-cylinder series both are on the program, as well as the Central Wisconsin Steel Frame Challenge Series and support divisions. Fred Mueller Qualifying begins at 6 p.m. with racing at 7 p.m.