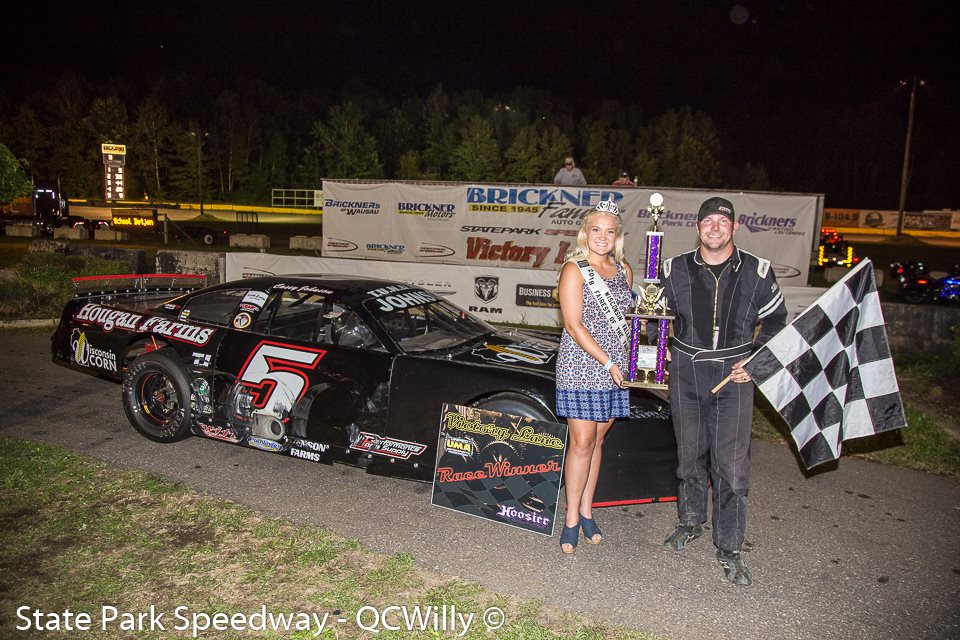 In the long tradition of Wisconsin racers who will race any time, anywhere, Casey Johnson has never been afraid of a challenge.

The Cambridge driver has proven to be one of the most talented drivers in the state by being capable of winning anywhere and he added to a growing collection of prestigious wins in his career by claiming the Northcentral Technical College Truck Driving School 100, the main event of the 38th annual Larry Detjens Memorial at State Park Speedway.

Johnson added his name to a list of Detjens winners that includes the likes of Dick Trickle, Tom Reffner, Tim and Johnny Sauter and Scott and Chris Wimmer, to name just a few. He did so by making the final move in a battle with up-and-coming 15-year old Carson Kvapil of Mooresville, N.C., and then holding Kvapil by two car lengths for the win.

“It’s definitely an honor,” said Johnson in Brickner Family Auto Group Victory Lane after the race. “I obviously was a little too young to watch Larry race, but I take the time to ask the old guys about him because it sounds like he was a heck of a guy and all around heck of a driver.”

Johnson led the final 25 laps after getting the better of Kvapil on the last restart in a caution-laden race that included eight yellows. Given a second chance after losing the lead to Kvapil on a restart three laps earlier, Johnson made the most of it.

Kvapil, the son of former Wisconsin racer and NASCAR truck series driver Travis Kvapil and driving a former Ty Majeski car while touring the Midwest this summer, had taken the lead from Johnson on a restart with 28 to go, getting a good jump on the outside and going to the front for the first time in the race. Johnson had to fend off Gleason’s Justin Mondeik for second, but the caution flew for the final time on lap 76 when Ryan Hinner spun between turns three and four, with Mike Olson clipping him and having to go to the pits.

Kvapil was strong on the outside all race long, and he made the bold move to take the outside when choosing his lane on the restart. That allowed Johnson the inside of the front row, and he made the most of it by with a good jump at the flag this time and then cleared Kvapil a lap later.

Kvapil was briefly engaged for second again with Mondeik, who was strong all race long and finished third. Kvapil eventually broke free, but by then Johnson had too, and though he lurked the final 15 laps, Kvapil could get no closer than three car lengths in the final laps.

“Carson had a heck of a car out there, and he’s going to be a force to be reckoned with here shortly, but man, we finally won one here,” said Johnson, who has had his share of podium finishes without a win at State Park since winning the 2013 Big 8 race.

Johnson came out on top of a strong 17-car field in a race where a number of drivers appeared to be the fastest at given times. Luke Fenhaus started from the pole and led with three-time Detjens winner Mark Mackesy behind him in the early stages, but Mondeik moved to the front row on a lap 32 restart and passed Fenhaus on the outside on a lap 32 restart.

Mondeik was then challenged by Stratford’s Derek Kraus, the 16-year old currently racing in the NASCAR K&N West Series, with Kraus ready to take the lead on the outside at one point before another caution flew. Mondeik led until lap 63, when he got loose and Johnson got inside of him and made the pass, with Kraus also following through.

“We’re pretty excited to be on the podium at the Larry Detjens Memorial,” said Mondeik after the race. “At the same time we’re a little disappointed, at about 25 to go at the restart we felt that we were better than the ‘5’ (Johnson)…then we had another caution, and the car kind of got a little bit tight on entry…I’m really happy but still a little disappointed, too.”

Ryan Farrell of East Troy finished fourth, setting fast time in Fred Mueller Qualifying and coming through the pack on several occasions, first after being involved in a spin and later after going to the pits with a flat tire. Kraus slipped back to fifth at the end, while current track points leader Fenhaus finished sixth.